There are plenty of fish in the sea. It’s an essential saying preached too often by wise elders, perhaps heard one time too many from the mouths of our grandparents and titas. When you’re single, fishing for a potential guppy may be fun every now and then, but some treat singlehood as a lottery and go all out with net fishing. The more entries, the more chances of winning? Perhaps. But hell hath no fury like a woman scorned.

Actor and model Carlos Agassi came under fire recently when a certain Summer Sayson exposed Agassi’s alleged womanizing ways in a Facebook post last Feb. 2. The post contained a series of pictures from Agassi’s personal Facebook account, as well as screenshots of messages sent by different women who were approached by Agassi. 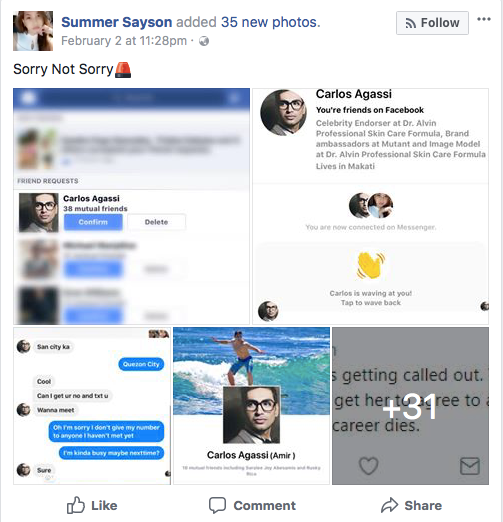 As Sayson’s post got traction, more women took to the comments section to share their experiences with Agassi. China Roces, an FHM model, commented on the Sayson post by uploading a screenshot of Agassi sending her multiple messages and asking her to hang out.

Although Roces didn’t reply to any of his messages, the screenshot showed that Agassi was still persistent, texting her everyday. 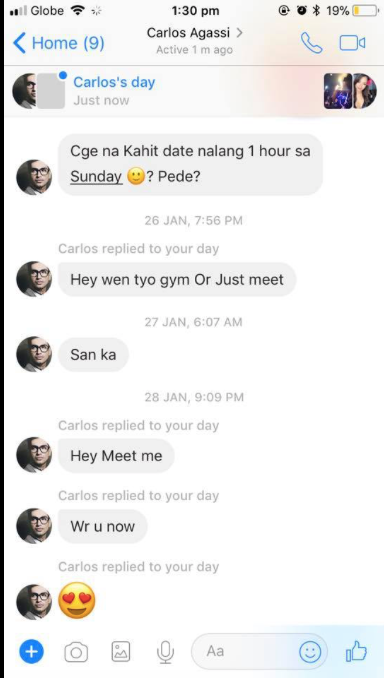 Another woman, Allyssa Mae Lao, ambassador of multiplayer online battle arena “Garena: Arena of Valor”, posted a screenshot of her conversation with Agassi.

Based on the screenshot Agassi can be seen sending Lao consecutive messages, even asking her if she’s single and giving her his phone number. 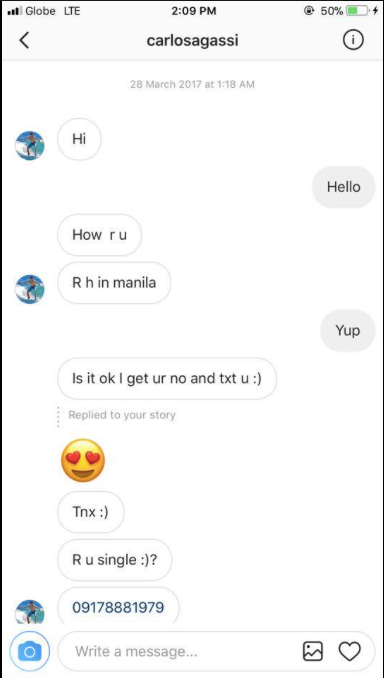 Alynna Valbuena, an ICU nurse from The Medical City, shared her own experience with Agassi, who she said tried to ask her for a quickie.

When Valbuena asked if they were going to eat dinner, Agassi told her, “Ako dinner mo.” (I am your dinner). 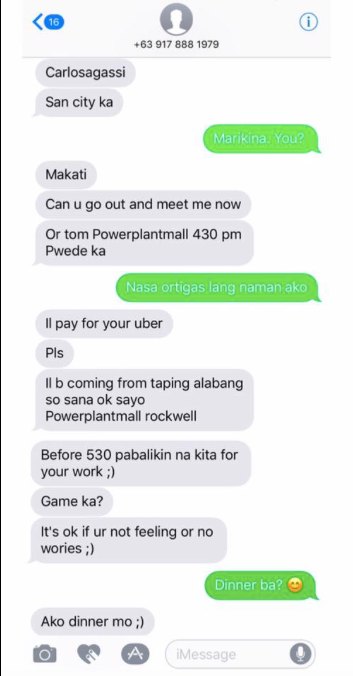 Mayumi Yokoyama, another FHM model, said that Agassi tried to approach her before as well, not knowing that Yokoyama’s boyfriend is a friend of his. When Agassi messaged her, Yokoyama sent a picture of her boyfriend Matthew, who was asking Agassi how he is.

Agassi immediately backtracked and apologized to his friend. “Sorry brother,” said Agassi, extending a greeting to the boyfriend. 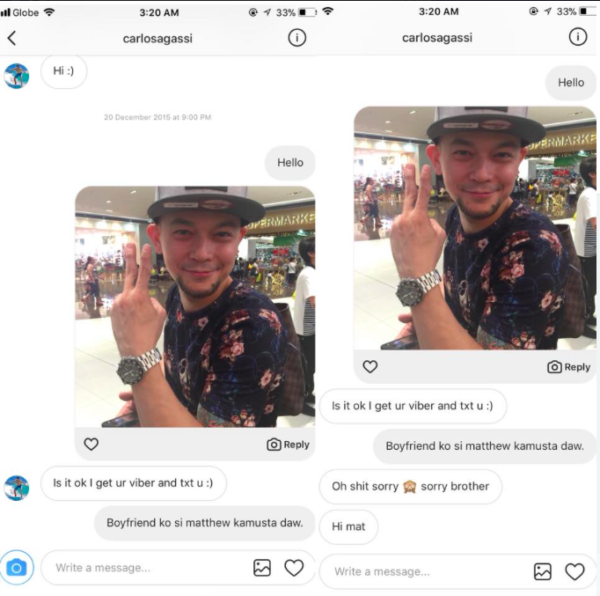 Other netizens also shared their own horror stories about Agassi. A reliable source of INQUIRER.net shared that Agassi hit on this source’s friend before, that friend being a member of the Palmolive Circle of 10.

Another named Jepoy Sevada said that Agassi hasn’t changed at all, sharing that he always went to the Solaire casino not to gamble, but to pick up casino dealers.

Alex Pascua, on the other hand, told the story of one friend who went out on a date with Agassi. The friend made it clear that she wasn’t down to hook up, to which Agassi responded by messaging another woman while they were still eating and then eventually leaving her there at the restaurant.

Agassi tried to clear the air by taking to Instagram early this morning, posting a lengthy message in his defense. He first expressed thanks for the weird feeling of embarrassment and happiness; embarrassment because the people he cares about are affected, and happy because he got to know the people who truly care about him.

He also said that he has learned his lesson, and warned people to be really careful because there are others out there who won’t think twice to hurt your feelings or ruin your reputation to be famous.

“I actually told myself cguro pag di hot chick mabait (maybe if the chick is not hot, she is nice), yun pala yung hot chick mas mabait (that’s the real hot chick, one who is nicer) and won’t post pics or even take screen shots,” Agassi wrote. “So I guess don’t lower your standards and stick to your type.” 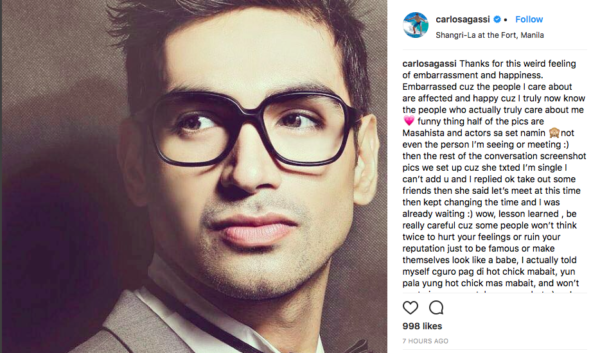 Agassi further speculated that perhaps a group of people who hate him ganged up on him and are now trying to destroy him. To close, he called for people to spread good vibes instead, and that he will pray for strength and guidance to become a better version of himself. JB

Lifestyle’s fearless survey: Who has the best abs?