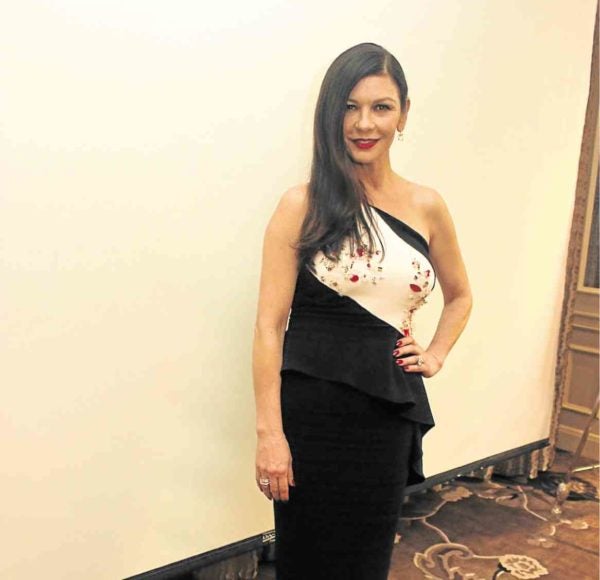 LOS ANGELES—“It was a looming accusation. I’m very happy that Michael did a preemptive move,” Catherine Zeta-Jones said about the allegations of sexual harassment, which supposedly happened 32 years ago, against her husband, Michael Douglas.

“It’s really a question for him,” the actress said in our recent interview. Michael’s former employee, writer Susan Braudy, claimed in The Hollywood Reporter and “Today” interviews that the Oscar-winning actor masturbated in front of her and subjected her to profane language. “You can imagine—this was something that happened 30-odd years ago, supposedly,” Catherine added. “And unfounded. Michael needed to make that stance.”

Michael decided to address the sexual misconduct claims and preemptively denied the charges before the story was published.

“There’s nobody who supports this (Time’s Up) movement more than me or my husband,” said the “Chicago” and “Traffic” star. “Michael has a fantastic track record with producers, artists and crew, whom he has worked and created with for over 50 years. So, this was very upsetting. I am glad that the no-story has been put straight.”

“Anything like that that’s erroneous and false would take anyone by surprise,” Catherine pointed out.

She tackles the title role in “Cocaine Godmother,” a Lifetime TV movie based on the true story of Griselda Blanco, who entered the United States at the age of 17 with a fake passport and became embroiled with the drug business.

Earning that moniker, she was known as a ruthless drug lord who was reportedly responsible for up to 200 murders.

After her release from a California jail, Griselda—also known as the Black Widow and the queen of narcotrafficking—was deported to Colombia, where she was shot dead in 2012.

In a lighter vein, we asked Catherine about her experience presenting the best screenplay-motion picture with her father-in-law—Spartacus himself—Kirk Douglas, who got a rousing standing ovation in the recent Golden Globes.

The appearance of the screen legend was one of the evening’s highlights, a fitting moment since it was the 75th anniversary of the Golden Globes and the Hollywood Foreign Press Association, which votes on and presents the awards.

“He had a wonderful time,” Catherine said about the 101-year-old Kirk, who came onstage with her in his wheelchair. “It was very special for him. He had a truly special night.”

“First of all, I was thrilled,” recounted Catherine, beaming in a stunning Pamella Roland dress. She began her account of preparing to present with the highly respected veteran actor: “We call him Pappy. He was genuinely thrilled to be asked, at 101, to come and be out there. He was looking forward to it.
“Earlier, I asked him, ‘When are you coming back again?’ He answered, ‘I will be back in 10 days.’ I asked, ‘Ten days or two weeks?’ He said, ‘Ten days.’ So, he knew that in 10 days, he was going to see us. So it was something to look forward to.

“I go over to have dinner with him the night before (the Golden Globes). You’re going to laugh about this. I said, ‘Should we run it [lines as presenters]?’ He went ‘Yeah, OK.’ It was very nicely written, about Dalton Trumbo and the Blacklist. I went, ‘Kirk …’ He went, ‘My turn?’ I went, ‘Yeah, this is when you speak. After I finish that ‘Spartacus’ line, you speak. You know what, I will give you a tap on the back and that will be your cue.’

“He said, ‘I was wondering why you had more lines than me.’ He made me laugh so much. It was so wonderful to see the genuine respect and love for him. I see him all the time because he is just a wonderful inspiration.

“There was a very nice clip beforehand, and he just loved it. I know that he and my mother-in-law Anne have watched it, like, 10 times. He did say to me that I looked beautiful in that dress. Then, he said, ‘What dress (laughs)?’”