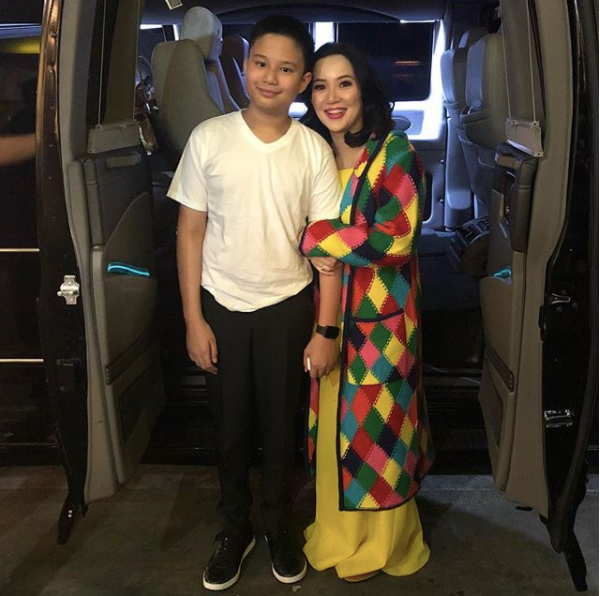 Aside from being a major media personality, Kris Aquino showed that her children are her No. 1 priority, especially when it comes to their safety.

On Instagram, the Queen of All Media shared on Tuesday that her family “had an emergency,” and shared a photo of herself tending to her youngest son, Bimby, along with several other doctors in the Medical City in Pasig City.

Aquino narrated that Bimby accidentally slipped as he was getting out of the pool in his school, making him land on his right elbow and pelvic area.

As he was rushed to the nearby hospital, she did not hide how frantic she was seeing her son hurt and going through various process to see if he was okay.

“I was scared because the first result showed apparent bone separation in his right elbow,” Aquino wrote. She then expressed her thanks to the orthopedic team, as they explained to her that the bones in his body “are growing and fusing together” as part of his body development.

All was well when the results came out and showed that Bimby sustained no fractures, although his arm was swelling. “We need to [i]mmobilize his arm for [three] days & [e]levate it above the heart to help lessen swelling.”

We had an emergency. Bimb was doing his swimming lessons. He was getting out of the pool, slipped & landed hard on his right elbow & pelvic area. This is when i’m thankful our home is near Medical City. In 20 minutes we were in the ER, the very efficient staff got our info, and they did his X Rays. I was scared because the first result showed apparent bone separation in his right elbow. Thank God their orthopedic team was thorough, they did a full X Ray of his left arm for comparison because they explained children still have bones that are growing & “fusing” together. Results showed no fracture just soft tissue contusions. The area now is swelling. We need to Immobilize his arm for 3 days & Elevate it above the heart to help lessen swelling. This is from a mom to other parents- Bimb still drinks 2 glasses of milk a day. Big glass w/ Milo in the morning, and fresh milk before sleeping in a smaller glass mug. His bones withstood the impact of his bad fall because of his daily calcium intake. Thank You God that although my bunso is in pain, it’s not a worse situation. Home now. Good night from a mom who is now feeling the post accident stress. #motherhood ♥️♥️♥️ (P.S. my sons & i have full medical insurance both for here & abroad. It is a worthwhile expense because Bimb’s health card took care of all his ER expenses & we only spent for his prescription medicine. Pls consider health insurance for your family, it’s a good investment. I’m now looking at getting health insurance for all those under my employ to supplement PhilHealth. #learnings)

She then gave a heart-to-heart advice to other doting mothers to make sure their children have their calcium intake, like what she does with her son who “drinks two glasses of milk a day.”

“His bones withstood the impact of his bad fall because of his daily calcium intake,” Aquino said.

The media personality also advised her followers to get health insurance. “It’s a good investment,” she noted. “It is a worthwhile expense because Bimb’s health card took care of all his ER expenses & we only spent for his prescription medicine.”

The Queen of All Media is known for sharing her daily life with her followers on her various social media platforms, as well as giving advice and clapping back at bashers. /ra