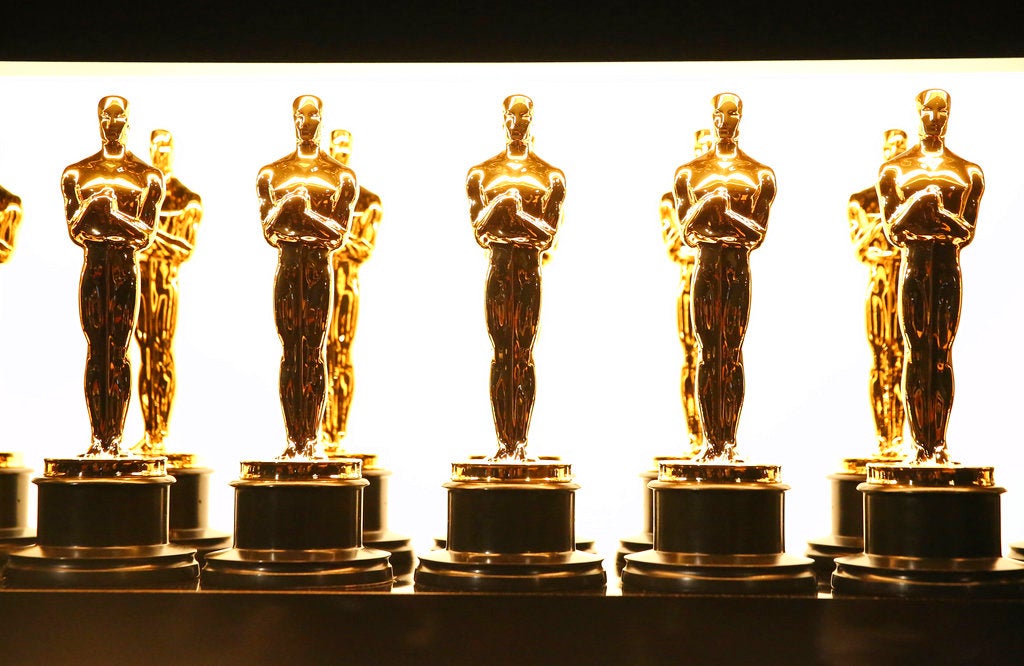 FILE – In this Feb. 26, 2017 file photo, Oscar statuettes appear backstage at the Oscars in Los Angeles. Nominations for the 90th Oscars will be announced on Tuesday, Jan. 23, 2018. (Photo by Matt Sayles/Invision/AP, File)

NEW YORK (AP) — Guillermo del Toro’s lavish monster romance “The Shape of Water” will vie for the most Oscar nominations Tuesday, but just as much attention may be focused on categories where women could make history.

Nominations for the 90th annual Academy Awards will begin at 8:22 a.m. EST, with a second wave of nominees announced live on ABC’s “Good Morning America” at 8:38 a.m. The announcement will also be live-streamed at Oscar.com and Oscars.org . Tiffany Haddish and Andy Serkis will join John Bailey, president of the film academy, to announce the nominees from Beverly Hills, California.

While this year’s Oscar race has been unusually wide-open, “The Shape of Water” has a chance to tie “All About Eve,” ”Titanic” and “La La Land” with a record 14 nominations.

Yet many will be watching the best director category more closely. “Lady Bird” filmmaker Greta Gerwig is expected to be just the fifth woman nominated in the category, and the first since Kathryn Bigelow was in 2010. “Mudbound” cinematographer Rachel Morrison could also become the first woman ever nominated for best cinematography.

Scrutiny of both categories, especially best director, has heightened in an awards season that has coincided with the Me Too movement and the toppling of numerous prominent figures in the movie business. For the last two decades, Oscar nominations morning has often belonged to Harvey Weinstein, the now disgraced movie mogul whose promotion strategies have influenced a generation of best picture campaigns.

But this year is different. The cascading fallout of sexual harassment scandals has lent new urgency to efforts to correct Hollywood’s poor record of gender equality and sparked the Time’s Up initiative intent on balancing the scales. If Gerwig is nominated for best director, she will follow only Lina Wertmuller, Jane Campion, Sofia Coppola and Bigelow, the sole woman to win (for “The Hurt Locker”).

The scandals have shaped other categories, too. James Franco, who has denied allegations of sexual misconduct, is a borderline best actor contender for “The Disaster Artist.” Christopher Plummer, who replaced Kevin Spacey in Ridley Scott’s “All the Money in the World,” may sneak into the best supporting actor category just two months after shooting his last-minute performance.

“Three Billboards Outside Ebbing, Missouri,” starring Frances McDormand as a mother out for vengeance for her raped and murder daughter, has claimed the mantle of most timely Oscar contender even while many have claimed it’s out-of-touch when it comes to race. It remains the best picture front-runner after winning best ensemble at Sunday’s Screen Actors Guild Awards.

But certainty has been hard to come by this season, which will culminate in the March 4 ceremony hosted by Jimmy Kimmel. Gerwig’s “Lady Bird,” Jordan Peele’s “Get Out,” Christopher Nolan “Dunkirk” and Steven Spielberg’s “The Post” are all in the mix, too. The individual acting categories seem more established after a litany of awards for McDormand, Gary Oldman (“Darkest Hour”), Allison Janney (“I, Tonya”) and Sam Rockwell (“Three Billboards”).
“Moonlight,” ”Hidden Figures” and “Fences” last year offered a reprieve from two straight years of #OscarsSoWhite online protests. This year’s acting field is expected to include a handful of black nominees including “Get Out” breakthrough star Daniel Kaluuya, “The Shape of Water” co-star Octavia Spencer and “Mudbound’s” Mary J. Blige.

Last year’s Oscars broadcast, also hosted by Kimmel, drew an average of 32.9 million viewers for ABC, a four percent drop from the prior year. More worrisome, however, was a steeper slide in the key demographic of adults aged 18-49, whose viewership was down 14 percent from 2016.

Though the show ran especially long, at three hours and 49 minutes, it finished with a bang: the infamous envelope mix-up that led to “La La Land” being incorrectly announced as the best picture before “Moonlight” was crowned.

This year, the academy has prohibited the PwC accountants who handle the envelopes from using cellphones or social media during the show. The accounting firm on Monday also unveiled several reforms including the addition of a third balloting partner in the show’s control room. Neither of the PwC representatives involved in the mishap last year, Brian Cullinan or Martha Ruiz, will return to the show.

But the movie business has larger accounting problems. Movie attendance hit a 24-year low in 2017 despite the firepower of “Star Wars: The Last Jedi,” ”Beauty and the Beast” and “Guardians of the Galaxy, Vol. 2.” An especially dismal summer movie season was 92 million admissions shy of summer 2016, according to the National Alliance of Theater Owners.

Still, the summer produced one best-picture favorite, “Dunkirk,” which grossed $525.6 million worldwide. Warner Bros.’ Patty Jenkins’ “Wonder Woman,” released in June to $821.8 million in ticket sales, became the highest grossing movie ever directed by a woman. It mounted an Oscar campaign and while it seems to be on the outside of the best picture race, “Wonder Woman” could win nods elsewhere, including best adapted screenplay.

But the box-office hit that has carved the most unlikely path to the Oscars is “Get Out.” It opened back in February on Oscar weekend, and went on to pocket $254.7 million worldwide. Though “Get Out” and “Dunkirk” will likely lend a blockbuster punch to the best-picture field — something that has historically helped ratings of the broadcast — the other films in the mix are smaller indies.

It should be a dominant if bittersweet day for 20th Century Fox. Its specialty label, Fox Searchlight, is behind both “Three Billboards” and “The Shape of Water,” and Fox released The Post.” Yet those wins may soon count for the Walt Disney Co., which last month reached a deal to purchase Fox for $52.4 billion.

Amazon and Netflix appear to be largely on the periphery of this year’s Oscar race. Netflix’s “Mudbound” may land a supporting actress nomination for Blige, and Amazon’s “The Big Sick” may yield a nod for Holly Hunter in the same category. MKH

TAGS: "All the Money in the World", "Lady Bird", 90th Academy Awards, Call Me By Your Name, Dunkirk, Oscars, The Post, The Shape of Water