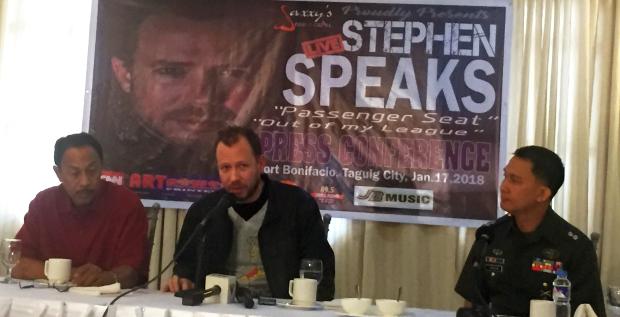 Rockwell Ryan Ripperger of Stephen Speaks (center) holds a press conference on Wednesday, Jan. 17, 2018, at the headquarters of the Philippine Army in Taguig. With him is Lt. Col. Ray Tiongson, Army spokesperson. (Photo by FRANCES MANGOSING / INQUIRER.net)

American singer-songwriter Rockwell Ryan Ripperger of Stephen Speaks is in the Philippines to lend his talent to do a benefit shows to help wounded soldiers from the five-month battle in Marawi.

Ripperger said he wanted to do something for a country that helped his music career. A portion of the proceeds from his shows will go to the wounded soldiers.

“It’s all over the news,” he said in a press conference held Wednesday at the Philippine Army headquarters in Taguig. “When I was a kid, the Philippines helped me launch my music career and was so supportive of me, and we wanted to do something, a benefit. It’s the least I could do to help out – give a little back to a country that has given me so much. I’m honored to be a part of it, to help out.”

Stephen Speaks is known for hits like “Passenger Seat” and “Out of My League.”

If there’s any song that he would dedicate to the wounded troops, Ripperger said it would be one from his upcoming album, titled “Alive to Fight.”

“It’s about struggle and getting through,” he said. “The album’s not out yet. I also wanna make a video with footage of Marawi efforts.”

“Definitely, it will boost their morale and it will relaly help them recover fast so they could go back to their unit and serve our country,” Tiongson said.

“Thank you guys for fighting. Thank you for sacrifices,” he said. “When ‘Alive to Fight’ comes out I hope that inspires you, I hope it resonates with what you’re doing tp keep the country free. I’ve seen the footage and the news. It’s been a struggle. You emerged victorious… I hope my music can bring you some comfort, courage and some joy.”

Read Next
Matt Damon apologizes for comments on sexual misconduct
EDITORS' PICK
Geek out at TOYCON 2022 powered by Smart Signature
House energy committee chair Arroyo bats for cheap electricity
UK’s Boris Johnson will resign, BBC reports
High inflation: Your P1 is now worth only 87 centavos
Unemployment rate up to 6% in May
High-risk pregnancy: Reducing your risk is in your hands
MOST READ
Suspect in grisly killing of missing woman in Bulacan arrested
Kim Atienza’s daughter flaunts bikini body in response to critics of her ‘revealing photos’
Japanese artist who created ‘Yu-Gi-Oh!’ found dead in the sea
FDA probes popular Filipino noodle brand for ‘high level of ethylene oxide’
Follow @FMangosingINQ on Twitter
Don't miss out on the latest news and information.