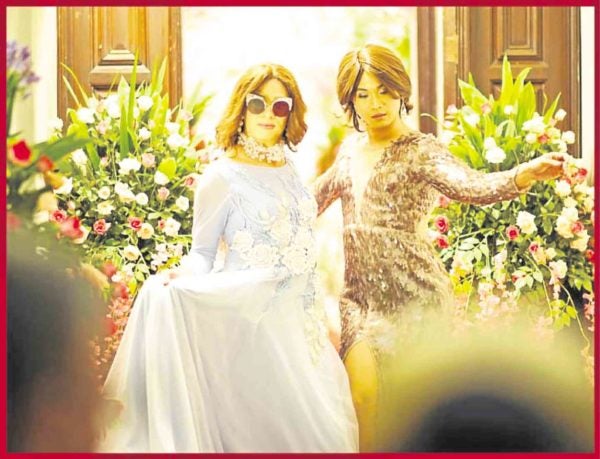 The Metro Manila Film Festival (MMFF) film, “Deadma Walking,” has an initially quirky and thus enticing plot premise: A “gladly gay” caballero (Joross Gamboa) is told that he has about a year to live, so he decides to stage his own demise ahead of time, so he can attend the wake and bask in his loved ones’ tearful praises and encomiums.

To pull off his most unusual scheme, he conscripts his best friend (Edgar Allan Guzman) to “produce and direct” the whole sham shebang—and they are able to pull the wool over everybody’s tearful eyes!

But, here’s the rub: Joross’ disguise as a mysterious transgender friend of the deceased is so nominal and obvious that viewers are able to spot the ruse right off the bat. So, how come the people closest to him swallow the whole “incognito” scenario—hook, line and stinker?

By making its protagonist get away with his scheme so easily, the movie shoots itself in the foot early on—and thus hobbles through the rest of its storytelling, tempting viewers to retitle it, “Deadma Limping!”

It really is a pity, because Julius Alfonso’s flick has some good things going for it, paced by its “gorgeously gay” production design, the “delicious” portrayals of its lead players, and some admittedly florid and over-the-top ruminations on love, death and friendship.

But, effective and diverting bits and pieces do not an integral viewing experience make, so our overall evaluation of the flick is perforce restricted to being—correspondingly “deadma.”

Yes, it’s “just” a gay romp not meant to be taken all that “seriously”—but, any film requires its makers to create its own believable “universe,” and this is where this movie falls crucially and tellingly short.

Other movies about masked or mistaken identity have worked much harder and more inventively for their ruses to pass muster and deceive viewers, because they realize the power of believability, and its consequent ability to make viewers empathize with and care about what happens to their films’ protagonists.

Other debit points include “Deadma Walking’s” denouement, which is made weak and unfocused by its believability gap—despite a big plot twist that takes its treatise on friendship up to a higher and more “telling” level.

Another distracting and unproductive fuss and bother is the series of “contrapuntal,” black-and-white inserts of Eugene Domingo channeling a mature Frenchwoman in full, “poetic” ache and angst, while an artsy Gallic love-and-pain anthem yowls on the soundtrack, like a menopausal cat in frustratingly recollected heat.

Yes, a gay romp is entitled to its bitchy-witchy fun and games, but not if the viewer feels left out of the private joke. The film-viewing experience is about them, too, right?

Cameo performances that should be singled out are by Gerald Anderson, Vin Abrenica, Ricci Chan and Iza Calzado.

Many other guest stars and starlets had “walk-on” and “talk-on” parts, but most of them—got lost in the madding crowd.