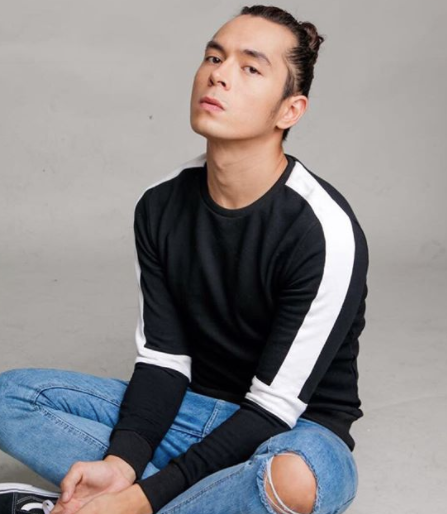 Kapamilya actor Jake Cuenca remains optimistic he would get an acting award someday.

Before 2017 ended, Cuenca gave a Christmas gift to his fans via his Metro Manila Film Festival entry “Ang Panday” where he played the lead villain Lizardo. Because of his performance, he got a nomination for Best Supporting Actor. However, the award went to “Deadma Walking” star Edgar Allan Guzman.

Nonetheless, this did not sadden the actor. Just as his fans believe he is deserving of an award, so does he, but he is not in a hurry and is hopeful it would come at the right time. 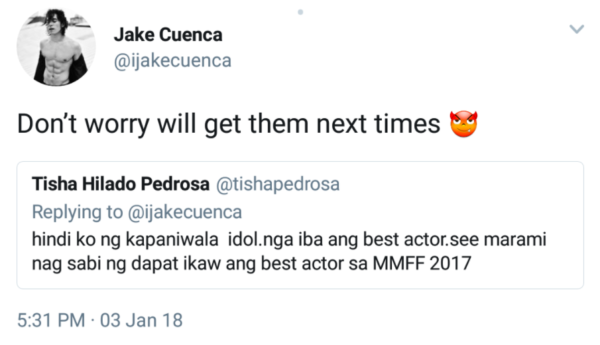 On Twitter, a fan named Tisha Hilado Pedrosa recently went up to Jake and confided she could not believe the actor did not win Best Actor when, as she said, he was right for the award, just as it was vouched by many.

“Hindi ko ng kapaniwala idol. nga iba ang best actor. see marami nagsabi ng dapat ikaw ang best actor sa MMFF 2017,” said Pedrosa. (I cannot believe idol that you did not win Best Actor when many believed it should have been you as Best Actor for this year’s MMFF)

Cuenca only replied, “Don’t worry will get them next time.”

“Ang Panday” stars himself, Coco Martin and Mariel de Leon among others and is still showing in cinemas nationwide.