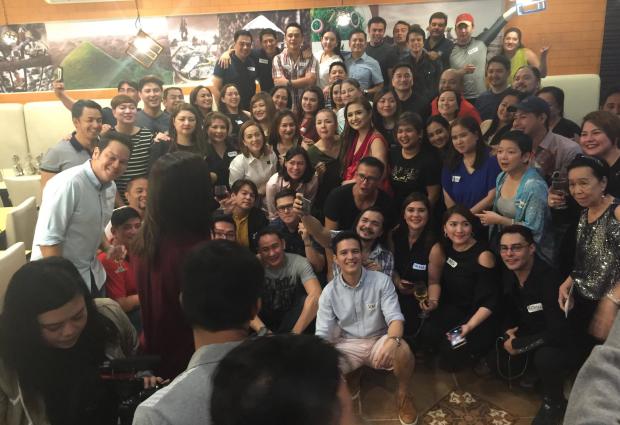 Inarguably, “That’s Entertainment” was the pioneer of star-producing youth-oriented shows. It gave birth to the careers of most of today’s most enduring actors.

As it nears its 31st anniversary on Jan.6, its stellar graduates are set to reunite once more to relive the glory days of their youth and commemorate its founder, the late star builder, German “Kuya Germs” Moreno.

Even before Jan. 6, over half of program’s former members gathered to reconnect and reminisce about the good times of the show.

The reunion happened in Quezon City, at Salu restaurant, which is owned by couple Romnick Sarmenta and Harlene Bautista, fellow “That’s Entertainment” members.

Sarmenta, Bautista, and singer and Thursday group member Mark Anthony recently sat down for an exclusive interview with Inquirer.net to give the beats on the upcoming anniversary of “That’s Entertainment”.

“Saka ‘yung first intention lang talaga was to reconnect,” Sarmenta, who belong to the Wednesday group, added. “Pangit kasi yung magkikita kita kayo na dahil lang.. [someone had passed on]. It is for us to become closer again and reminisce as a family.”

True to the spirit of genuine friendship, the celebration would not be as commercial as how they normally did back in the day. It will only be a simple gathering which the members plan to do for a cause.

“If ever, we will do anything that’s commercial in any way we would like to honor the memory of Kuya Germs – and every other member of ‘That’s Entertainment’ – by making sure that commercial event would be beneficial to someone else. Charitable event ‘yun,” Sarmenta said.

“We are not talking with any network, because it’s not going to be a show. It’s going to be us getting together,” he added.

The phenomenal youth-oriented program ran for a decade from 1986-1996. Back then, viewers were glued to their TV sets as the afternoon ended because “That’s Entertainment” was about to air. The program, created by Kuya Germs, catapulted the careers of more than a hundred hopeful teenagers into superstardom.

“‘That’s Entertainment’ was the beginning of everything,” said Anthony. The US-based musician said it was just surreal to be a teen star during their time as the love of fans was just so overwhelming.

Moreover, much of the success of the show was because of its unique design. Their productions were mostly spontaneous, done on the spot. They simply did whatever Kuya Germs asked them to do.

This developed the members’ versatility and flexibility – allowing them to sing, act, or dance.

Read Next
‘The Office’ may come back for a revival
EDITORS' PICK
High inflation: Your P1 is now worth only 87 centavos
UK’s Boris Johnson will resign, BBC reports
High-risk pregnancy: Reducing your risk is in your hands
Geek out at TOYCON 2022 powered by Smart Signature
House energy committee chair Arroyo bats for cheap electricity
Unemployment rate up to 6% in May
MOST READ
Suspect in grisly killing of missing woman in Bulacan arrested
Kim Atienza’s daughter flaunts bikini body in response to critics of her ‘revealing photos’
Japanese artist who created ‘Yu-Gi-Oh!’ found dead in the sea
FDA probes popular Filipino noodle brand for ‘high level of ethylene oxide’
Follow @CAbanillaINQ on Twitter
Don't miss out on the latest news and information.