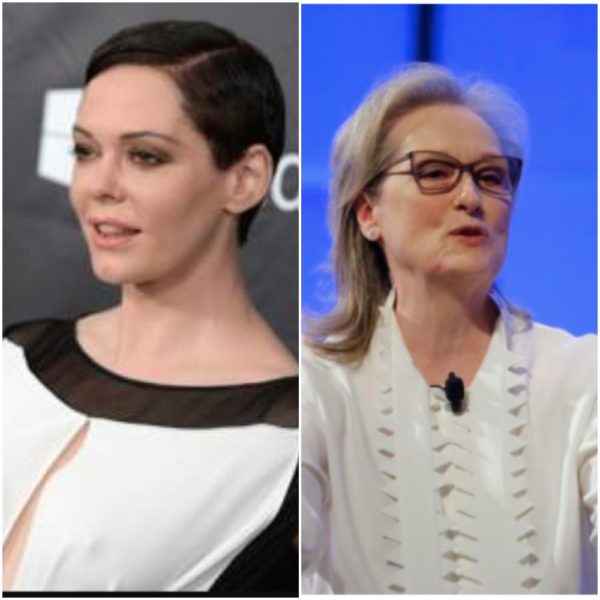 Actress Rose McGowan went on a Twitter rampage on Sunday, hitting Meryl Streep and other actresses who plan to wear black as an act of protest at the upcoming Golden Globe Awards.

This comes after The Hollywood Reporter said that several actresses will attend the awards happening on Jan. 7 in an all-black outfit, symbolizing their protest about gender inequality in Hollywood. The protest comes after a string of sexual harassment allegations against fallen movie mogul Harvey Weinstein.

McGowan shot at Streep and the actresses for their planned sartorial protest and said, “Your silence is the problem.”

“You’ll accept a fake award breathlessly and affect no real change. I despise your hypocrisy,” the actress snapped. She snarked that they should wear Marchesa, the fashion line that Weinstein’s estranged wife, Georgina Chapman, established.

Actresses, like Meryl Streep, who happily worked for The Pig Monster, are wearing black @GoldenGlobes in a silent protest. YOUR SILENCE is THE problem. You’ll accept a fake award breathlessly & affect no real change. I despise your hypocrisy. Maybe you should all wear Marchesa.

This was not the first time McGowan called out the Academy Award-winning actress over the Weinstein issue, branding her “a lie” and asserting that what the producer did was a “f*cking crime.” McGowan could not accept what Streep previously told audience members at a conference for women held in Boston, referring to Weinstein’s actions as “the most gargantuan example of disrespect.”

No, Meryl, IT’S A FUCKING CRIME. You are such a lie # ROSEARMY Meryl Streep on Harvey Weinstein allegations: It’s ‘the most gargantuan example of disrespect’ – USA TODAY https://t.co/3E2oiCauME

McGowan was one of the women who first came forward against Weinstein in the New York Times exposé which reported about cases of his sexual harassment acts. She is set to release her first autobiography titled “Brave” in January next year. Katrina Hallare/JB