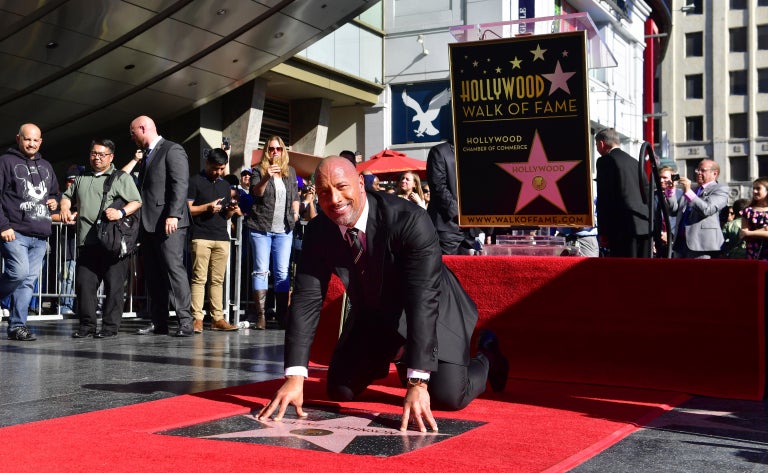 He’s been named “sexiest man alive” and “world’s highest paid film star” — now Dwayne Johnson can celebrate being accepted into the Hollywood establishment with a Walk of Fame star.

The 45-year-old football player turned wrestling pro and then actor sported a sharp black suit and was joined by longtime partner Lauren Hashian and their almost two-year-old daughter Jasmine at the ceremony on Hollywood Boulevard.

“I didn’t want to write anything down. I figured this is such a monumental moment and significant time for me it’s probably best I just speak from the heart and from my gut,” the Herculean father-of-two said.

He told cheering fans the 2,624th star on the Walk was the result of years of hard work, voicing gratitude for the opportunities he’d been afforded and the friends and family who’d helped him along the way.

“This moment is so significant because it’s full circle. 2018 will mark 18 years in Hollywood and that is a very long time of blood, sweat and earning respect,” he added.

Johnson announced Monday on Instagram that he and Hashian were expecting a second child, hours before they stepped out for the premiere of his latest movie “Jumanji: Welcome to the Jungle.”

Tom Rothman, chairman of Sony Pictures Motion Picture Group, paid tribute to the actor, who has entertained the possibility that he might run for president in 2020.

“Dwayne said he would use me as a bar bell if I didn’t show up,” Rothman joked, before describing his friend as a “global superstar with hundreds of millions of fans and billions of dollars in box office.”

Johnson’s recent work includes “Baywatch,” “The Fate of The Furious,” “Central Intelligence” and “San Andreas,” as well as the HBO comedy “Ballers.”

Reputed to be one of the hardest-working stars in Hollywood, he has been in 14 movies in just four years, including previous installments of the “Fast and Furious” franchise, “Hercules,” “Snitch,” “G.I. Joe: Retaliation,” “Empire State,” “Pain and Gain,” and “Moana.”

Born on May 2, 1972, in the San Francisco Bay Area and raised in Hawaii and Pennsylvania, Johnson grew to six foot five inches (196 centimeters) and weighs 245 pounds (111 kilograms).

He played defensive tackle at the University of Miami and went on to a stint on the practice roster of the Calgary Stampeders of the Canadian Football League in 1995.

Nicknamed “The Rock” due to his strength in the ring and roughhewn features, he was declared “sexiest man alive” by People magazine in November 2016.

It was a good year for the actor, who was also named the world’s highest paid film star by Forbes magazine. AB

Read Next
Why Sarah Lahbati thinks the question ‘How to be you?’ isn’t cute
EDITORS' PICK
Acer starts the year off strong with the Aspire Vero National Geographic Edition
Gear up and get ready to play with Yamaha Mio Gear
Over 3 Million worth of prizes to be won at Smart Padala’s SENDali Manalo Promo!
Metro Manila posts lowest temperature yet this ‘amihan’ season at 19°C
DOH: 28,471 new COVID-19 cases in PH; active cases now 284,458
On Day 2 of implementation, gov’t says workers now exempt from ‘no vax, no ride’ policy
MOST READ
Cold-case investigation names surprise suspect in Anne Frank’s betrayal
Emma Stone calls Andrew Garfield a ‘jerk’ after he ‘lied’ about his ‘Spider-Man: No Way Home’ appearance
Derek Ramsay on being married to Ellen Adarna: ‘Gumaan ‘yung mundo ko’
Czech anti-vax singer dies after deliberate infection
Don't miss out on the latest news and information.