The home stretch–from a canter into a gallop | Inquirer Entertainment

The home stretch–from a canter into a gallop 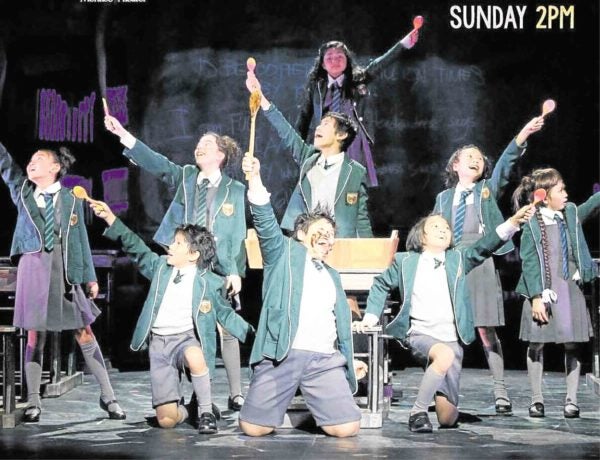 The cast of “Matilda”

NEW YORK—Now that we have only a few more days before our opening night on Sunday, the pace at which we approach this date will turn from a canter into a gallop.

It’s Monday afternoon as I write this, which puts us at six days before we can consider our show, “Once on This Island,” frozen (meaning, no more changes will be made, rehearsed and incorporated) and our regular run officially begun.

Our schedule will remain incredibly busy, with rehearsals in the afternoon on days when we only have evening performances, as well as a few press appearances in order to promote the show.

We can see the light at the end of the tunnel. The same goes for my friends working on “Matilda” in Manila heading toward its final two weekends.

Previews are almost over

Unlike in Manila, where most productions experience just one or two previews before opening night, our little skit has a full three and a half weeks, when our director and choreographer can rehearse new bits of staging or choreography.

As luxurious as that time period might seem (the preview stage lasts as long as some runs in Manila), for many on the creative team, three and a half weeks just isn’t enough to get everything done.

For the actors, it’s most definitely an exhausting process, what with rehearsals for five hours, then a performance that same evening (this thankfully ends tomorrow). Add to that our crazy holiday schedule where, because of certain holidays, we can have 10 shows in a row here, then only five after a day off, and then, as will be the case this week, 11 in a row until Dec. 6, with our opening night this Sunday, Dec. 3.

It’s a time period when we need to gather our strength, stamina, focus, humor and patience for this final push.

Our preview audiences have been invaluable in providing the feedback required to hone in on the storytelling of our piece.

In the rehearsal room, that instant response is absent, which means that we can’t always tell if something is working or not. However, with all the preview performances we’ve had thus far, knowing how a line falls with a full house in attendance informs all teams that we’re either taking steps in the right direction or need to get rid of what doesn’t work.

Even in a revival, we treat this as if this were a brand-new show.

I’ve also been getting reports on how “Matilda” is doing (and, by extension, how my daughter Nicole is faring).

The reviews it has received from both critics and audiences have been incredible, with both the kids and adults receiving accolades. My heartiest congratulations to the entire company for a stellar run!

I can’t wait to see the show for myself, and celebrate Nicole’s professional musical-theater debut with her and the rest of our family.

I have asked her how she’s been enjoying her time in
the show, and her responses have been enthusiastic. Musical theater has given me such joy over the years, and it warms my heart that it’s giving Nic much fulfillment, too.

However, she doesn’t have many shows left. Little one, mine your time left for all it’s worth, and don’t take any moment for granted. As her daddy said, it’ll end just as quickly as it began. He’s absolutely right.

The end of their particular tunnel is coming up soon, with only two more weekends of performances to go, which means that you, dear readers, don’t have much time left to catch it.

“Matilda” runs until Dec. 10 at Meralco Theater. Call TicketWorld at 891-9999 or visit ticketworld.com.ph.