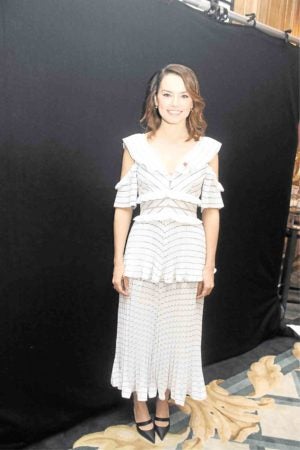 LOS ANGELES—Daisy Ridley, film’s woman du jour, walked into a meeting room at Claridge’s Hotel London in a white Self-Portrait dress and Louboutins. The English actress has stayed the same amid her success—easygoing and down-to-earth.

Daisy not only has the plum Rey role in the “Star Wars” sequel trilogy. She plays Miss Mary Debenham in “Murder on the Orient Express,” the latest adaptation of Agatha Christie’s classic whodunit aboard a lavish train. Kenneth Branagh, whom Daisy calls Ken, directs and stars as the famed Belgian detective, Hercule Poirot, with an all-star cast: Johnny Depp, Penélope Cruz, Judi Dench, Michelle Pfeiffer, Willem Dafoe and Josh Gad.

The Westminster, London native also stars in the title role, “Ophelia,” described as a take on Hamlet from Ophelia’s perspective; “Chaos Walking”; “A Woman of No Importance”; “Kolma”; and “Peter Rabbit,” where she’s one of the voice cast. With these projects, it was not a surprise to hear Daisy say that she really hasn’t been home since March.

You are in a whole different wardrobe scenario from “Star Wars.” Do your costumes for this film feel more make-believe? Putting the costume on felt like putting on a character, which was helpful because it felt like make-believe, too. So much of it is everyone’s toying with the truth anyway, if that makes sense.

And does it feel more glamorous, though? Yeah, and elegant. I had to wear a little waspie (waist cincher or belt), which made my posture great, so I felt like a lady.

Your character is one of the most mysterious. Would you consider yourself mysterious? No (laughter). I think I’m the most transparent, un-mysterious person ever.

Are you good at keeping secrets? I’m seriously awful at keeping my own secrets. When it’s someone else’s, I’m fine because it’s not my secret to tell. That’s why weirdly, I don’t find it a problem with this film and with “Star Wars,” because they’re not my secrets. It’s like 2,000 people made this film. It’s fun for people not to know. It’s unusual, and this is different because a lot of people know the ending, but it’s like we know so much now.

How did you react when you saw Kenneth Branagh for the first time with a mustache? Apparently I said, “Oh, that’s bold (laughs).”

Carol (Hemming), who’s our amazing hair and makeup designer, did that mustache, which was epic. The first time I saw Kenneth in the mustache, he did go, “Don’t make me laugh. It’s going to come off.” But, it never did (laughs).

How has fame changed your life? Has it affected your mundane activities like shopping, for instance? No. I was talking to Tom Holland the other day on [the “Chaos Walking”] set. People were talking about buying a watch. He was like, “Have you bought yourself anything?” I was like, “No.” I just bought a plane ticket home, which was awesome because I got to go home for the day.

It’s weird. In the past few months, it’s suddenly gone a bit different. People saying, “Hi, I loved your film.” It always surprises me. I always think something else happened in the street.

Where is home for you these days? I live in a flat (in London) that, sadly, has been unoccupied for some time because I’ve been away. Not sad to be working, but I basically haven’t been back in my flat since March. Luckily, my friend moved in this year to make it feel like a home. It was nice because the few times I have come back, she’s been there and I’m like, “Oh, my God, flatmate, it’s awesome.”

What was it like to work with a “Star Wars” legend like Mark Hamill? What was amazing was the first time, because I was working more with Harrison (Ford). I was like, I don’t want to disturb him (Mark).

We had conversations about life. Advice was never given without asking, if you know what I mean. Working with him was wonderful.

He’s exactly how he always is. He’s very talkative, warm and a really good actor, so there were moments where I just felt like, wow. I remember at one point, I went over to Rian (Johnson, director) and I was like, “Oh my God, that was moving.” I felt really lucky that I was able to have that with him. 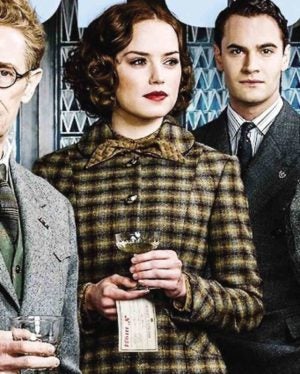 Daisy Ridley in “Murder on the Orient Express”

How much do you enjoy dressing up for the red carpet? I like it. But I find the process of being photographed scary. But you sit down in a chair and then two hours later, you’re like, Oh, my God, I look presentable. That’s great because when I wake up, it’s like I’m never going to be ready for the day. Then, someone comes in, you sit there, drink your coffee and you’re, like, awesome.

Can you talk about your reported comedy project with Josh Gad that’s a spin on the superhero genre? It was Josh’s idea, so that’s more a question for him. I’m a very happy potential participant if everything goes according to plan and everyone can fit it in in their schedules. It’s a great fun story.

I’m not a massive superhero person because I didn’t watch those movies. Growing up, I was always more of a book reader than a film watcher. The comics thing always passed me by.

It’s like the “Star Wars” canon. I don’t know all of the things that link everything. People are like, “Oh, this happened in this comic book, this story.” I’m like, “Oh, it’s a fun film.” But, it’s not with the zeal that people have for superhero films.

But in terms of poking fun at superhero movies, that’s a question for Josh. In essence, it’s a fun story, but it’s still a superhero film. It’s a different take on the genre.

Do you see yourself as a director or producer someday? Happily, I can say that I was the executive producer of “The Eagle Huntress,” which is awesome. My mom has said to me a number of times that because I’m so bossy, I should direct. I’m like, “That’s not what constitutes a good director (laughs).” I don’t know. Maybe all those things—producer and director. I hope I have a degree by then. That one first.