James Franco wows with love letter to an awful movie 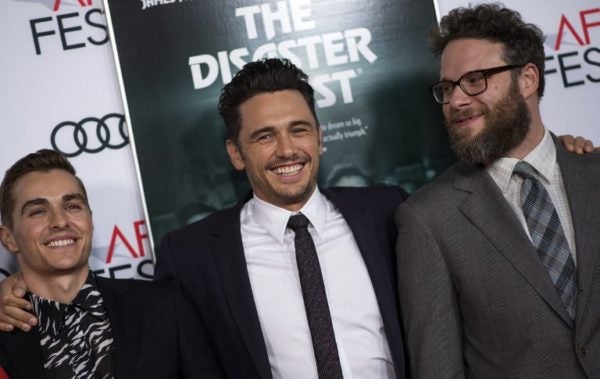 In 2003, “The Room” opened in California and quickly became known as the “Citizen Kane of bad movies” — a melodrama so poor that it went on to gain cult status.

Writer-director Tommy Wiseau’s production is still shown to delighted audiences around the world, fans reveling in the unmitigated awfulness of its acting and its bewildering, convoluted script.

To this day, Wiseau remains an enigma but Hollywood star James Franco is attempting to shine a light on the filmmaker with “The Disaster Artist,” a comedy about the making of a movie many regard as the worst ever made.

“This was unlike any Hollywood story I’d ever heard or read about,” said Franco, who was compelled to make “The Disaster Artist” after reading about its nightmarish production in a behind-the-scenes memoir of the same name.

“I read the book and just thought this will be so unusual and weird, but at its core it will be this great story about dreamers trying to make it, and about friendship.”

Franco, 39, takes on the role of Wiseau but “The Disaster Artist” plays out mostly through the eyes of Wiseau’s friend and co-producer Greg Sestero — played by Franco’s brother Dave.

The pair meet at acting school in San Francisco and then move into Wiseau’s apartment in Hollywood, where they spend a year unsuccessfully trying to break into the business before deciding to make their own movie.

Quite where Wiseau got the cash even to keep two apartments, let alone fund a motion picture entirely on his own, remains one of the many puzzles surrounding the production of “The Room.”

Another mystery to this day is his age and nationality; he claims when he meets Sestero to be 19 and from New Orleans but looks comfortably two decades older and has a distinctly eastern European accent.

With no idea what he is doing, he is seen lavishing a reported $6 million on his cast, crew and soundstage, as well as equipment he doesn’t need.

He turns up late for work, slows production by forgetting his lines and petulantly mistreats his actors when it all starts to go haywire.

Franco, an erratic Hollywood actor and director whose up-and-down career could easily have gone the way of Wiseau’s but for his considerable talent, has received almost universal acclaim for his impeccable comedic timing.

As well as casting his brother, he calls on longtime friends and collaborators Seth Rogen, Zac Efron, his sister-in-law Alison Brie as well as a conveyor belt of cameos from huge names such as Sharon Stone, Melanie Griffith and Bryan Cranston.

Franco — who stayed in character as Wiseau, complete with prosthetics, when he was behind the camera — has directed himself before, most recently on HBO drama series “The Deuce.”

“I actually prefer directing other actors. I would prefer not to act in my own movies,” he told AFP at a gala screening of “The Disaster Artist” for the American Film Institute’s AFI Fest on Sunday.

“I love the collaborative process and I love working with actors who bring more to the table than I could think of.”

It is not always clear whether the audience meant to be laughing with Wiseau or at him, but both he and Sestero have been supportive of Franco’s project, and were at Sunday’s screening.

“If you analyze James… he did a real story, not just a parody, which I like. That seems to me like a respectful way to do it,” Wiseau said.

“The Room” played in Santa Monica for two weeks — so as to qualify for the Oscars — making just a few hundred dollars, but it has since acquired a new life as a cult movie, easily recouping its budget at midnight screenings.

“It lives in a space of its own because it is a piece of art at the end of the day,'” said Ari Graynor, who plays one of the stars of “The Room.”

“The Disaster Artist” hits US theaters on December 8.