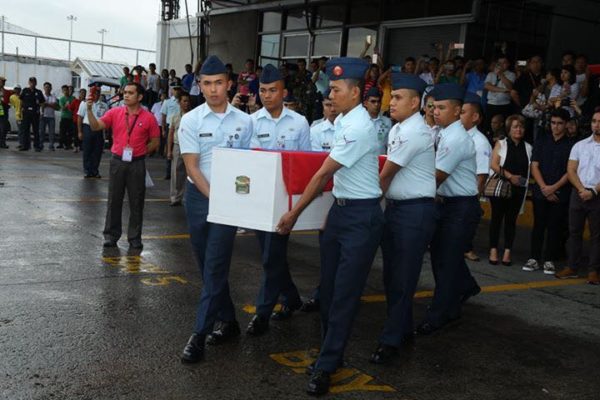 Military honors for Airwoman Second Class Isabel Granada. Her remains arrived early Thursday, November 9, 2017, in the Philippines from Doha Qatar via Philippine Airlines PR 685. Granada died at the age of 41 last November 4 at the Hamad General Hospital in Doha, Qatar due to aneurysm.(PHOTO FROM PHILIPPINE AIR FORCE)

The remains of actress Isabel Granada arrived yesterday morning at the Ninoy Aquino International Airport cargo terminal from Doha, Qatar, where she died last Nov. 4 after suffering from aneurysm.

A pilot, Granada enlisted with PAF in 2001, serving in the Air Force Service Group before leaving the service with the rank of Airwoman second class.

“She spent a year as an active PAF enlisted personnel as part of the PAF Women’s volleyball team and opted to remain as a reservist, where she continued her support by willingly performing, hosting and lending her celebrity status to draw crowd in PAF events,” the PAF said in a statement.

Crowley burst into sobs after the casket was brought into the terminal by a forklift from the cargo hold of Philippine Arlines Flight No. PR-685, which arrived at around 10:20 a.m. on Thursday.

“We did things together, we traveled together… Now that she’s gone, I really don’t know what I’m going to do, but somehow I’m going to try to push through. She was a loving wife, a caring person; she’s always giving time to people and she’s just a people person,” he told reporters.

Hubert, Granada’s son by her first husband, said he found it difficult to cope with the sudden demise of his mother.

“I have lots of regrets because I was a bit distant. We don’t really communicate as much,” he said, adding that his mother’s last words to him, when they talked over the phone, was ‘I love you.’”

He said children should spend more time with their parents.