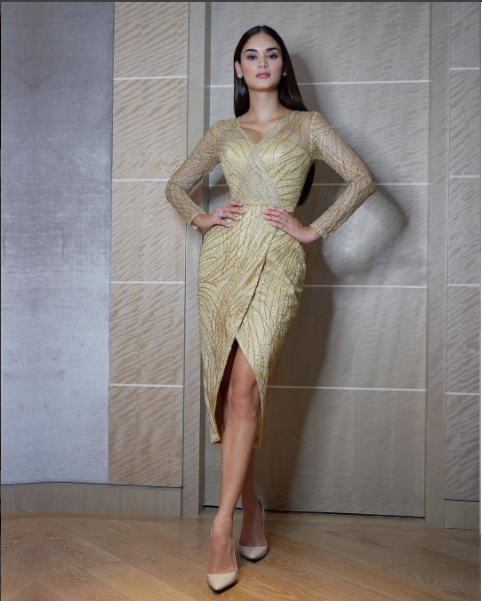 Miss Universe 2015 Pia Wurtzbach was yet again called out by netizens for keeping silent on a current issue, which made her later explain that she is “pro-life.”

On Twitter, Wurtzbach recently posted about the back-to-back win for Philippine bets Karen Ibasco and Winwyn Marquez, who bagged the crowns for Miss Earth and Reina Hispanoamerica, respectively.

While majority of Wurtzbach’s fans and followers celebrated with her, some netizens used the opportunity to call out the beauty queen for remaining mum on socially-relevant topics, such as extrajudicial killings (EJK) of drug suspects in relation to the government’s war on drugs.

Netizen @ginowesome commented by saying that the Philippines is one of the countries “who failed to curb corruption and uphold the rule of law.”

“Until the day na may comment ka na about EJK, dun tayo magyabang sa crown mo. Thanks!” he added. (Until the day you have a comment about EJKs, only then can we be proud of your crown. Thanks!)

Another commenter, @parkjohn_ , echoed a similar sentiment. He also showed a screenshot of Wurtzbach blocking him for his remarks. 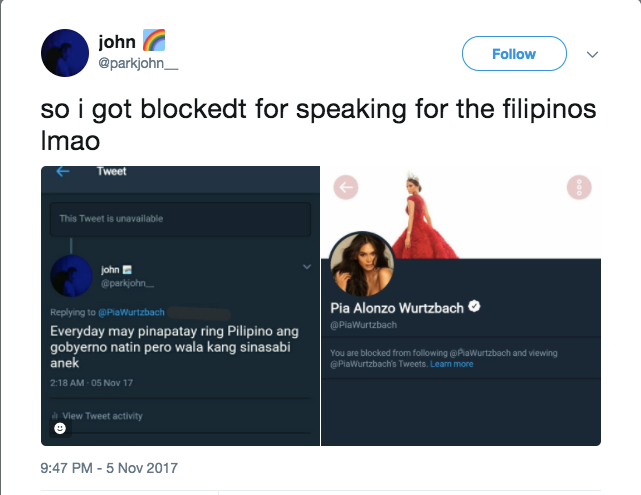 This led to others to reply to Wurtzbach on the same issue. One netizen, @BashBashHanash, reasoned that Wurtzbach’s silence on social issues may be due to her being always too busy snuggling with beau Marlon Stockinger; she said she regrets supporting Wurtzbach. 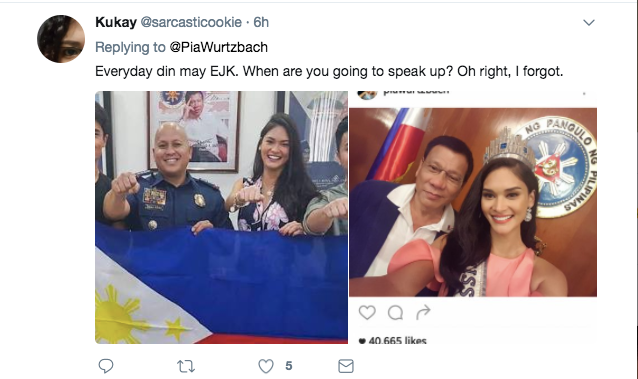 Wurtzbach later apologized for being misunderstood, stating that she did not mean to offend anyone. She also added that she is “very much pro-life.”

Twitter user @ginowesome later took again to Twitter and revealed that he was unblocked by Wurtzbach on the social media site. Still, he asked if what Wurtzbach meant by being “pro-life” is that she’s “anti-EJK.” 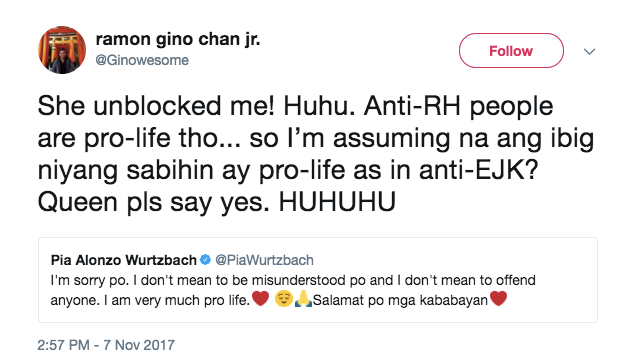 On a similar note, @parkjohn_ then accepted Wurtzbach’s public apology, and urged the beauty queen to “regain that crown” by “speaking out against injustice.”

Wurtzbach has been known for remaining silent about sensitive social issues that presently haunt the nation, unlike beauty queens or celebrities who use their platforms to raise awareness on such issues, such as reigning Bb. Pilipinas-International Mariel de Leon. Wurtzbach’s social media posts generally showcase fashion and personal updates. JB