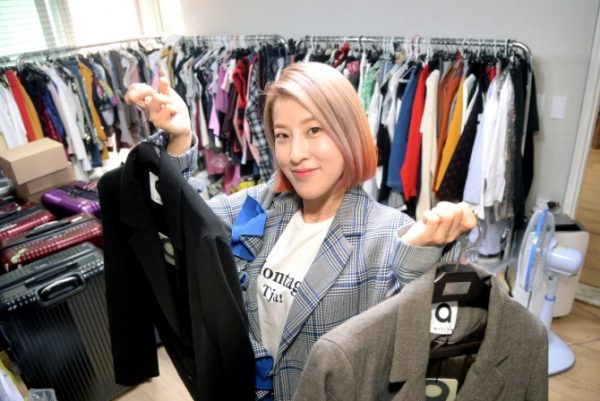 After over eight years of curating the looks of K-pop fashion icon Girls’ Generation, stylist Seo Soo-kyung is often called the ninth member of the group for her family-like bond and history with the members.

Since her initial engagement with the sensational girl group for its third full-length album “The Boys” in 2011, Seo has evolved side by side with Girls’ Generation to become a super-stylist who now has an impressive portfolio highlighted by partnerships with global stars Psy and Seventeen.

As a leading fashion expert who knows what’s in trend way before anyone, Seo also creates her own social media content series called “Soo’s Style.” Her sartorial opinions and fashion tips for the public are highly acclaimed and inspire aspiring stylists.

“Working with Girls’ Generation made me realize how important fashion was in the world of K-pop, and I drew many overseas fans of K-pop fashion all around the world,” said Seo during a recent interview with The Korea Herald in Seoul.

“My goal is to keep sharing what I know with them through my own social media content, rather than launching my own line, which many other stylists seek to do.”

Seo has been so busy these days that she barely has time for food, she said during the interview, while shoveling salad into her mouth.

Despite her success and fame, Seo highlighted that structural problems in the industry are major hindrances for those seeking to build a stylist career in Korea.

According to Seo, local TV stations are at the center of major problems, as K-pop agencies and their artists do not make much money from being featured on TV shows.

“It’s a vicious cycle. While K-pop has been sweeping the world, K-pop artists and people working with them such as stylists and managers are usually lowly paid compared to those people working in the same industry in Japan and the US, as K-pop agencies don’t get paid much from working with TV stations,” Seo said.

Seo revealed that stylists earn almost nothing after the money goes to artists first. Most of the time, they are treated poorly by both K-pop agencies and TV stations, compared to other countries.

“We work day and night for our artists, but we don’t get what we deserve from both sides. So most of our revenues come from outside of the industry, such as shooting ads. And people from advertisement complain that we stylists ask for too much money. What else can we do? We don’t get paid from our main field,” she explained.

Seo emphasized that another of her goals is to pave the way for a better working environment for younger stylists. She will begin by educating junior stylists and communicating with the public through the creation of fashion content. Seo has been teaching students styling at Chungkang College of Cultural Industries since February last year.

Having been involved in the industry for almost 15 years, Seo has witnessed how K-pop fashion has transformed over the years. Crediting Big Bang for K-pop fashion’s ongoing worldwide fame, Seo said the boy band was among the pioneers to feature a more down-to-earth approach to fashion. The group’s wardrobe was as realistic and hip as street fashion in Harajuku — and easily accessible to the public as well.

“Before Big Bang, K-pop artists’ costumes were literally costumes. Stylists’ job was to kind of copy the lines of famous designers and recreate them into stage outfits. But Big Bang members were different in that they actually wore outfits freshly out from a designer’s collection. The public could also dress like Big Bang. From that point on, K-pop stars like 2NE1 and BTS started to wear collections,” Seo said.

“Nowadays, it’s a bit hard to style K-pop idols stars, as their fans are usually young students. They prefer school uniforms, which they wear daily, to high-end fashion brands for their favorite K-pop stars. It’s tough to cater to their tastes.”

Seo went onto share what it has been like working with Girls’ Generation. She called Sooyoung her fashion muse, while naming Hyoyeon as the most challenging member when it comes to styling.

“Sooyoung, she has such a perfect body that can rock any kind of costume. I can style her in whatever ways. As for Hyoyeon, she didn’t listen to my opinion at first, as she wanted to wear girlish outfits like Yoona and Tiffany. But now she knows how to style herself according to her image,” she said.

Asked how she has been dealing with recent news that three members of the band Tiffany, Sooyoung and Seohyun did not renew their contracts with their agency, Seo shrugged and said, “Well, I don’t think’s it’s such a big deal, because I don’t think Girls’ Generation will disband.”

“People keep asking my opinion about the issue as if it’s a big problem. If they are to disband, I would be heartbroken too, as I’m also a huge fan of the group. But the thing is, members are not taking the matter seriously, and I personally think Girls’ Generation won’t disband.”