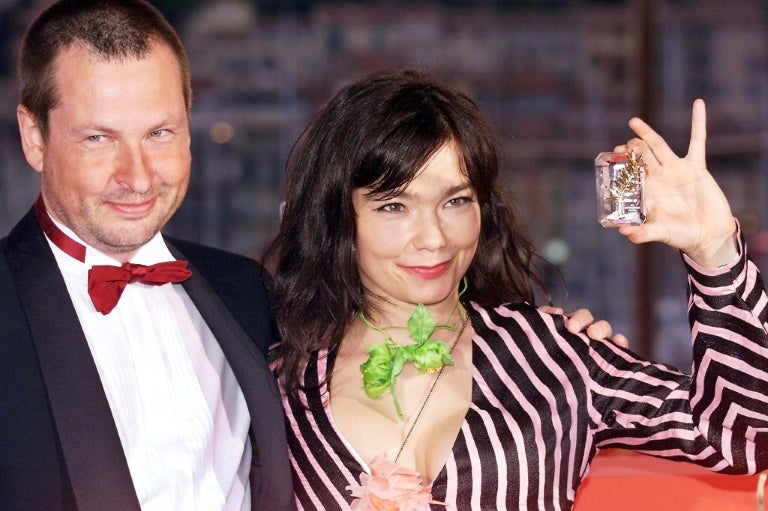 Lars Von Trier and Bjork at the 2000 Cannes Film Festival where ‘Dancer in The Dark’ – which he directed and she starred in – won the Palme d’or. Bjork was also named Best Actress. Image: AFP/Pascal Guyot

Danish film director Lars von Trier on Monday rejected Icelandic pop singer Bjork’s allegation that he sexually harassed her during the making of the critically-acclaimed movie “Dancer in the Dark”.

“That was not the case. But that we were definitely not friends, that’s a fact,” von Trier told Danish daily Jyllands-Posten in its online edition.

In a post on her Facebook page on Sunday, the singer-songwriter said she was inspired to speak out by the flood of separate allegations against United States producer Harvey Weinstein.

She said she “became aware” that “it is a universal thing that a director can touch and harass his actresses at will and the institution of film allows it.”

The 51-year-old musician, a former lead singer of iconic post-punk group The Sugarcubes, did not name the filmmaker to whom she was referring, but said he had “a staff of dozens who enabled… and encouraged” his behavior.

“When I turned the director down repeatedly he sulked and punished me” and “framed (me) as the difficult one,” she said.

Trier’s award-winning 2000 musical drama “Dancer in the Dark”, for which Bjork won a Best Actress prize at the Cannes film festival in 2000, remains the Icelandic star’s only film.

Producer Peter Aalbaek Jensen, who has partnered with von Trier on many films including “Dancer in the Dark”, meanwhile told Jyllands Posten that he and von Trier “were the victims.”

“As far as I remember, we were the victims. That woman was stronger than both Lars von Trier and me and our company put together. She dictated everything and was about to close a movie of 100 million kroner ($16 million),” he said.

Bjork has previously lashed out at the media for its “sexist” views and news coverage of women.

It’s not the first time Von Trier has been at the center of controversy.

A leader of the Dogme 95 cinema movement that frowns on special effects, he is known for his black humor and shocking scenes of sex and violence in films like “Antichrist”, “Melancholia”, “Manderlay” and “Breaking the Waves”.

He was kicked out of the Cannes festival in 2011 for telling a news conference he sympathized “a little bit” with Adolf Hitler. He later apologized for the comment. JB