How Pilita Corrales manages to still sing high notes at 78 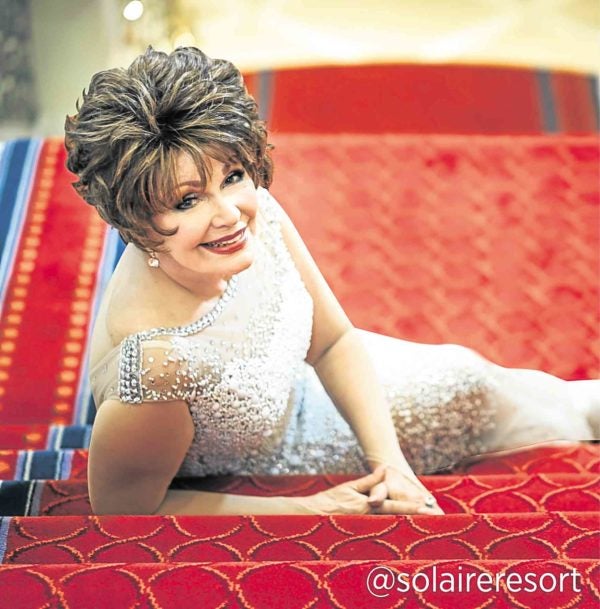 Retirement? The word has never crossed Pilita Corrales’ mind in the six decades she has so far spent in the entertainment biz.

“Maybe 10 years from now—how about that?” she told reporters at a recent press conference for her coming concert, “An Evening with Pilita,” whose title is a nod to the popular musical TV show she topbilled from 1965 to 1972.
“As long as there are people who want to listen to me, and as long as the Lord gives me good health, I will continue.”

Pilita, dubbed Asia’s Queen of Song, remains active in the live-music scene—as she so prefers. She still goes on concert tours abroad. And every so often, she makes guest appearances on TV shows, like the GMA 7 sitcom “Hay, Bahay!”

Still, not once did performing feel like a chore for Pilita. “The passion has to be there, always. Because otherwise, you won’t be able to deliver as you should,” she pointed out. “In my case, I’d love to continue singing, so I need to work hard, and learn and memorize songs.”

What excites her most about singing these days is the fact that she’s now able to pull off her old songs in their original key—thanks to her decision to quit smoking.

“I used to smoke, but I stopped seven years ago because of a severe vertigo attack that forced me to lie down without moving for seven days. The thought of having another episode deterred me from smoking again,” she related. “Yes, smoking makes your voice kind of sexy, but I’d rather have my old key back.”

“An Evening with Pilita,” which will be held on Nov. 17 at The Theatre at Solaire (call 891-9999), is the casino-resort’s third installment of its “icons series.” It’ll pay tribute to Pilita’s legacy, and look back at her journey, starting from her rise to fame in Melbourne, Australia in the ’50s.

“My first albums were recorded there, and I will definitely sing songs from those. There will be a lot of tidbits about my career in Melbourne,” said the 78-year-old singer.

“I was very popular over there because I had hits, and could sing in different languages—Tagalog, English, Spanish, Cebuano,” she recalled. “I became a regular in the show, ‘In Melbourne Tonight.’ Gowns were expensive back then. But since my mom created what I wore, I got to put on a new gown three times a week, which the fans always looked forward to.”

“There’s even a street named after me there!” added the seasoned artist, who’s famous for her rendition of the ballad “Kapantay Ay Langit,” and the way she bends her body backwards as she reaches for a high note.