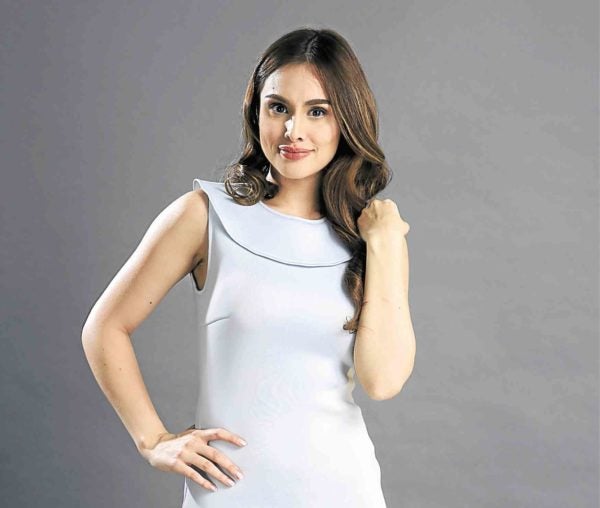 Actress Max Collins’ engagement to her boyfriend of four years, Pancho Magno, has put her “in a good, happy place.” Planning their coming December wedding, however, is another story, she said.

Overseeing the preparations can be fun, Max related, but also very stressful. “It’s true what people say, the bridezilla in you comes out!” the GMA 7 talent told the Inquirer in a recent interview for a coming primetime series, tentatively titled “Triple Ex,” which she topbills with Lovi Poe and Rhian Ramos.

She’s a stickler for details, so she makes sure to be involved in just about every aspect of her “big day.”

“You get to have only one wedding in your life. It’s a big deal for me. You have to be OC (obsessive-compulsive) because only you know what you want,” Max pointed out, who’s set to tie the knot with Pancho in Christian rites this December.

Pancho, on the other hand, is mostly “chill.” “Well, he does help. But, he always gives me the final say… He tells me that it’s the bride’s day, my day,” said Max, who initially thought of having a garden wedding. “But, we’re now looking into an indoor venue.”

What is she most worried about? “I’m nervous about the setup and how it’d look. I want to see my ideas come to life,” she said. “I want my wedding to have lots of flowers and good food, with everyone just being happy and having fun.”

In “Triple Ex,” which is set to air in the last quarter of the year, Max plays a strong-willed personal trainer who forms a friendship with Alex (Lovi) and Zoe (Rhian).
Later on, the three discover that they all dated the same man at different points in the past. The rom-com, helmed by Maryo J. delos Reyes, is said to be inspired by the hit American series, “Sex and the City.”

Max is also done shooting “Citizen Jake,” the comeback film of acclaimed director Mike de Leon. The experience, she recalled, was unique, to say the least.

“We filmed in Baguio, and our sets were private,” she said, adding that working with Direk Mike was both “amazing and humbling.”

“It was an honor for me, to be given this chance,” stressed Max, who recalled being convinced by her talent handler to audition for the movie. “I was so scared, which actually helped me, because the audition piece required me to be afraid. I didn’t think I would land a role!” she said.

“Direk Mike is such a cool and smart person. He can be funny, too. You can see his passion for the craft,” the 25-year-old actress said of the reclusive filmmaker. “He’s meticulous, but he lets us experiment with our characters. I learned a lot from him.”