Judi Dench on her 60th anniversary as an actress | Inquirer Entertainment

Judi Dench on her 60th anniversary as an actress 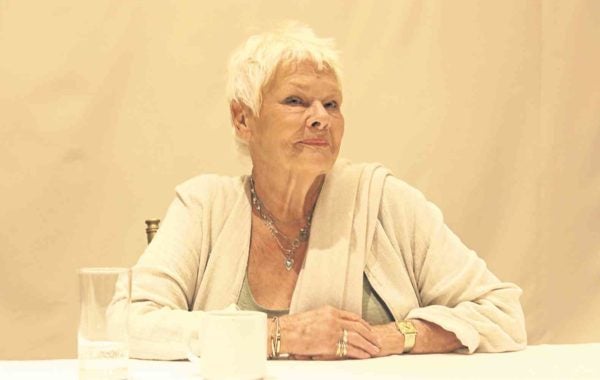 LOS ANGELES—“I’m the most ‘un-majesty’ person you’ve ever met,” Dame Judi Dench quipped with a laugh when addressed as “your majesty,” in reference to her Queen Victoria role in her latest film.

In Stephen Frears’ “Victoria & Abdul,” Judi portrays again the royal she played in “Mrs. Brown,” for which she earned a Golden Globe.

At 82, the beloved actress may be a bit frail and admits she now has poor eyesight. But as she sat in a meeting room at the Fairmont Royal York in Toronto, she was still a majestic presence—sporting short silver hair, layered clothing and lots of necklaces and bracelets.

Judi’s intense, expressive eyes can shift from girlish mirth to strong gaze in a few seconds, especially as she shared anecdotes.

She still learns a new word each day. “I will give you a new word,” said the multiawarded thespian. “I didn’t learn it today. I learned it in summer. Anatidaephobia—it’s the irrational fear of being stared at by a duck (laughs). Well, it’s worth learning, isn’t it?”

Aside from “Victoria & Abdul,” Judi plays the Abbess in “Tulip Fever,” Princess Dragomiroff in the coming “Murder on the Orient Express,” and is working on “Schadenfreude” as the film’s narrator.

“I’m incredibly grateful that at my age, I am asked to work,” she said. “In fact, recently I was 60 years on the stage. It’s called good luck.” More than that—it’s called sheer talent, which she has been sharing with the world since playing Ophelia in “Hamlet” at the Old Vic in 1957.

But she’s modest. “I’ve already told several people, but I was last in Toronto in 1959 or 1958 with the Old Vic,” she recounted. “I was walking through a square. Somebody—I hope this person’s still alive—suddenly got me by the arm and pulled me into a shop at the moment an enormous piece of ice crashed off the building onto the pavement. I was too shocked to say thank you to him. If he’s around, thank you. So, I mean I just think you’re very lucky to be employed.”

She’s a delight to watch in “Victoria & Abdul,” which is based on letters, journals and diaries between the monarch and an Indian man (Abdul Karim, played by Ali Fazal) featured in Sharabani Basu’s book, “Victoria & Abdul: The True Story of the Queen’s Closest Confidante.”

Widowed and in the last chapter of her life, Judi’s Queen Victoria cheers up with the arrival of the young, handsome Abdul, who teaches her how to write and speak Urdu and opens her eyes to new things. For example, when Abdul tells her about mango, Queen Victoria demands to see and taste the fruit for the first time.

When I told Judi that the sweetest mangoes are from the Philippines, she admitted with a chuckle, “I don’t like mango. I think I ate it once and I wasn’t very keen on it. Fortunately, I didn’t have to eat it in this movie. That would have been pretty unfortunate (laughs)— having to eat it.”

“I will tell you one other thing,” she offered while we were on the subject of food. “There’s a scene where I’m sitting, eating boiled eggs. They (actors playing characters) come in to complain to me. At the end of the scene, Campbell, who was our props man, came in and said, ‘Would you like to know how many eggs you’ve eaten in that shot?’ I said, ‘I would like to know.’ He said, ‘Eleven (laughs).’”

But when it comes to exotic food, Judi confessed, “I’m not very adventuresome. I’m a complete food coward.”

Judi’s eyes—often imperious in the film—softened as she gushed about Ali (an Indian star who’s a wonderful match to Judi). “I found him incredibly handsome. Oh, he’s beautiful. He’s also very tall.”

“It was lovely working with him,” Judi continued about her bearded costar. “He has a great sense of humor. We laughed a lot about the same things. People don’t perhaps think that sometimes it (filming) can be so difficult. But, Ali made it enormous fun. He also wasn’t adverse at all to rehearsing in a corner and just going through all of the Urdu and teaching me to write it.”

The Dame said that it helped that sometimes the props and location sites belonged to Queen Victoria herself. “We had the great good fortune of filming at the Osborne House on the Isle of Wight, which was Victoria’s home.”

On playing the Queen at a time in her life when she has lost her husband Albert and her beloved Scottish aide, John Brown, Judi explained, “I understood her passion for Albert and her grief after he died. And then suddenly being able to know John Brown. And to be able to talk to him with no strictures about it. I didn’t know, nor did any of us, about this relationship she had with Abdul.

“What I found was this very passionate person carried through all her life and in a way redeemed her at the very end, because she had 15 years when Abdul was there. When you read about her state at the time before he arrived, she may just have given up.

“But he awoke something in her that was always there but had been dormant perhaps since John Brown had died. It was like a flower opening again.”

“I think it’s relevant,” Judi commented about the film’s themes. “Perhaps it wouldn’t have mattered what nationality Abdul had been. It just happened that he was a Muslim. It’s a great message for now.”

Asked if she’s always open to new adventures in real life, Judi replied, “All the time. When I was 80, my daughter took me shopping. Suddenly, in the middle of the shopping spree, she said, ‘Are you ready now to have a tattoo?’ I said, ‘Yes, I am.’ So, I had the tattoo on my wrist. What does it say? ‘Carpe diem.’ Seize the day.

On who grounds her, her quick answer was this: “My family and friends won’t let me get away with anything.”

Is there a naughty side to her, as hilariously sketched in Tracey Ullman’s send-up of the “evil” Judi in her TV specials? “Tracey has given me a terrible reputation (laughs). She’s very clever,” she said.

Curiously, Judi and Tracey have not been in touch. “I think she knows I’m a huge fan of hers. She’s absolutely amazing. I’ll give her a good slap when I see her (laughs).”

So how does the Dame relax on days when she’s not on the set? “I paint a bit,” she said. “I see my family and friends more often because now I can’t read, and I can’t easily watch anything because I can’t see it.”

“No, I don’t have that (daily exercise) routine, and I know I should,” she admitted.

Looking back, Judi confessed to what she would have loved to do. “I trained to be a theater designer,” she began. “I went to Stratford-upon-Avon in the ’50s and saw a design for ‘King Lear,’ which was just a huge open stage with a rock in the middle of it. The rock was a throne, a cave—everything. It was turned around so nothing was required to come on and interrupt the action of the play. I remember thinking that’s exactly the kind of designer I’d like to be. But I recognized in myself that I didn’t have that imagination.

“My brother was an actor… I chose acting too and happily made a career out of it.”