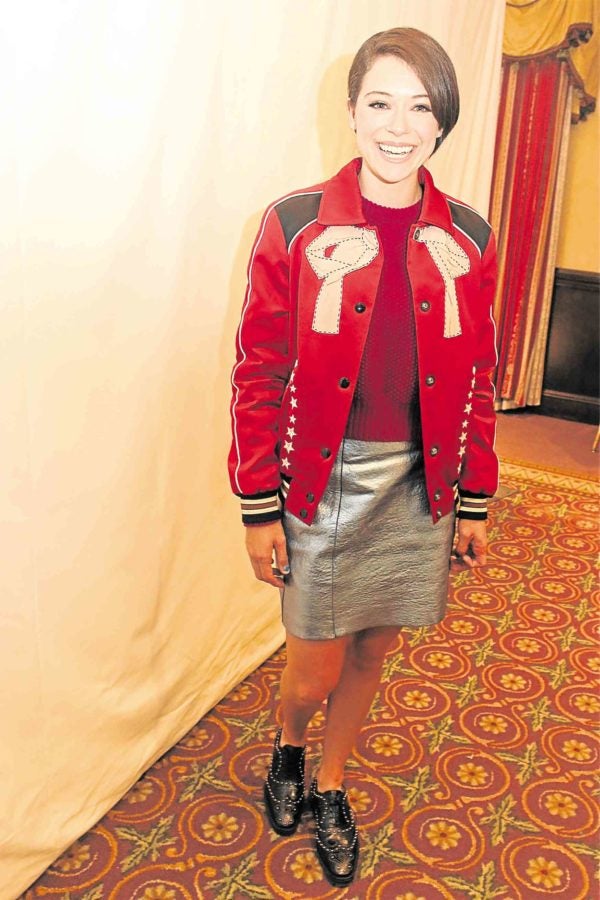 LOS ANGELES—After spectacularly playing many clones, each one distinct from each other—from Sarah to Helena, from Cosima to Alison in “Orphan Black”—Tatiana Maslany is playing only one character in a new film, and she’s earning just as many good reviews for her performance.

Jeff was waiting for Erin at the finish line when the blast occurred. He lost both his legs in the attack.

When he regained consciousness in the hospital, Jeff was able to help identify one of the bombers. Erin and Jeff’s family provided love and support to him as he faced months of physical and emotional rehabilitation.

Tatiana will next star in an indie film to be directed by her Welsh boyfriend, Tom Cullen, who’s also an actor. He played Krystal’s ex-boyfriend in “Orphan Black.” Tatiana and Tom also worked together in a film, “The Other Half.”

We interviewed Tatiana in Toronto, where she and Tom used to live. “We just moved to LA,” said the actress, fetching in a short haircut and a vintage look, capped by a red Coach jacket.

Asked if she had “withdrawal syndrome” from playing all those clones in the series that changed her life and career, the Canadian answered, “Absolutely. I had a real visceral reaction to saying goodbye to the Alison character. We were on set and doing an emotional scene. I knew it was my last scene with her. Then, my nose just started bleeding. It was like my body didn’t want to say goodbye to this part.

“But it’s an amazing feeling to have this show that I believe in so much and that it’s something that people can watch in years to come. I know that the themes of the show will be resonant to people down the road and that young women who have watched it have reached out to me.”

“Orphan Black” may have bowed out, but Tatiana is heartened to still hear comments that the drama series inspired some followers in their personal lives. “There is sadness that it’s over, but the cool thing is that the dialogue hasn’t stopped,” she said.

“People are talking like, this is why Cosima meant something to me because I didn’t know being gay was an option. I didn’t know that I could be myself in that way. Then, I saw Cosima and Delphine and I was empowered to do that in my life, to step out and go, this is who I am, and to talk to my parents and children about it.

“There were women in their 40s who were talking to me about finally coming out, although they knew they were gay at 2 years old. It’s the most amazing response I can imagine.”

Did the hardworking actress, who also starred in two short films (“Souls of Totality” and “Apart from Everything”), finally go on a vacation after the show ended? “I did take a break after we wrapped … I ran away with my boyfriend to Costa Rica for two weeks, which was amazing. Just being there was beautiful. There were animals everywhere. We were counting lizards, which was like my most exciting moment.

“Being on a beach and exploring the jungle was such a nice way to unwind and not be working, which is really important, since I have never stopped working since I was 9.”

Now, she’s actively pursuing the next roles that tap her acting range and talent. “I am going into rooms and auditioning,” she shared. “I love the feeling of being in auditions, as much as it’s terrifying and awful (laughs).

“It is a chance to just play and to work like the screen test for ‘Stronger.’ I got to work with Jake in a room for an hour … I am learning so much and getting to grow as an actor and exercise (my acting skills).”

Tatiana lavished praise on her costar: “Not only the script and David directing—Jake being in this role was a large part of why I wanted to do it … I have always looked up to him as an actor.”

Shooting and working with the community in the actual city where the bombing happened inspired the cast, she pointed out. “In Boston when we were filming this, we had to film a sequence of the marathon. So, we had all these extras on set, who were from Boston. They willingly came to recreate this moment in the city’s history that was extremely emotional and traumatic for almost everyone involved.

“In that moment, I felt like such a fraud being there. I was like, I am just an actor doing this, and this isn’t my story. What right do I have to do this and is this too soon for us to be showing this kind of story?  But the extras gave me this sense of being part of something important.

“The idea of community has been coming up a lot to me recently, in terms of what’s happening in the world. There’s a real need to not be divided right now because there’s such a divide.”

Looking into the future, Tatiana, who turns 32 on Sept. 22, remarked, “I have never really known where I was heading. I have just always followed my instinct, fear, excitement and creativity.”

She mentioned a part that she’d like to tackle someday. “I am thinking of Giulietta Masina in ‘La Strada.’ I had a friend who told me that I look like her. It would be fun to do something as her, because she’s just a unique character.”

In the meantime, Tatiana is excited to be teaming up with Tom. “He is an actor who did a film called ‘Weekend,’ and he has a series coming out called ‘Knightfall.’ This is his first directing feature. It’s very experimental, very improvised.

“I have never been directed by Tom. He is an incredible actor and artist, and he has a real instinct for directing. We definitely revere the (John) Cassavetes style of filmmaking, with this family that you create, where you all work together.”