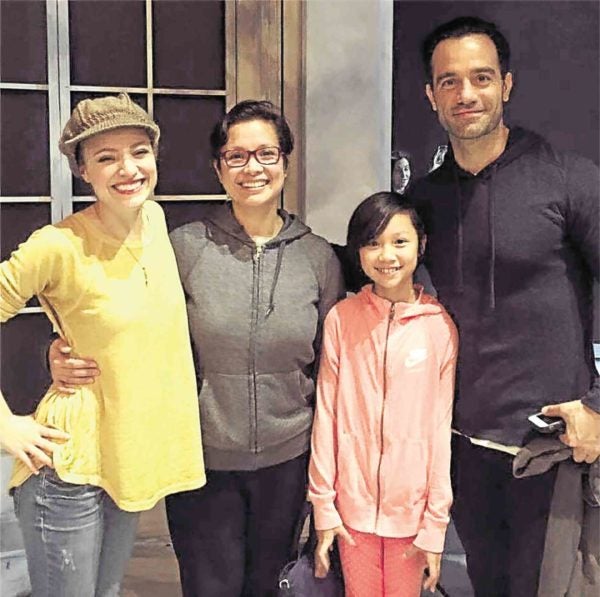 This is something I’ve not quite experienced before …

Not too long ago, it was announced that my daughter, Nicole, would be one of the “revolting children” in the Atlantis Theatrical production of “Matilda.” She’ll be playing Alice, alternating with Ella Gonzales.

Rehearsals for her will start in a few days, which means that, at home, we’ve got her script highlighted and bound, the cast recording playing more often than before, so she can familiarize herself with the songs, and the friendly verbal reminder that for weeks, she’ll have to leave school and hop in the car to head to her almost-daily rehearsals.

In short, she’s now living the life of a professional musical-theater actor. The life that I now lead.

As I’ll be leaving at the end of the month to begin rehearsals for the Broadway revival of “Once on This Island,” I too have been going through preliminary preparations of my own. Thanks to some amazing technology, OOTI’s stage management and music department (generous shout-outs to Justin Scribner, Chris Fenwick, Alvin Hough Jr. and Haley Bennett for all your help, profuse e-mails and patience) has sent me my script and music, updating me on whatever changes have been implemented.

A couple of weeks ago, the entire cast, plus the incandescent Janet Dacal as Erzulie (currently in “Prince of Broadway,” she graciously stepped in for me) performed the lab in front of a small group of theater people.

Michael Arden, the director, told the audience at the lab that some numbers would be put on their feet fully choreographed and staged, while others would be treated as a reading with scripts in hand. I got to hear a rough recording, and it sounded like a lot of fun! I can’t wait to jump in next month and meet everyone.

Preparation for me began at the beginning of September, listening to the MP3s and reading the script and score that Justin e-mailed. As changes, edits and line reassignments happened in rehearsal, I’d get a heads-up that an edit is on its way.

While I was in Honolulu for “Golden Moment,” I’d spend a bit of time at the hotel’s computer and print out pages to study.

Some of the music is quite challenging, thanks to brand-new vocal orchestrations by AnnMarie Milazzo, and new orchestra charts by the original production’s orchestrator Michael Starobin. Vocal parts are created to replace some musical instruments, which will make the sound of this revival much more acoustic and human. In other words, I need to start thinking like a member of the Madrigal Singers.

For my family, it’s quite an exciting time, but it does mean my missing out on a few things because of how the shows are scheduled: “Matilda” opens on Nov. 10 in Manila, while the first preview of “Once on This Island” is on Nov. 9 in New York.

Nicole is very aware that I will have to miss her first night. However, I will get to make it home for her closing the week ending Dec. 10, as our opening night on Broadway is on Dec. 3.

So, for now, I shall accompany her to as many rehearsals as I can, the way my mother did. It’s now my turn to be the dakilang alalay as she gets ready for her musical-theater debut (my mom and Rob will tag team once I head to New York). As early as now, it’s my turn to indoctrinate her in our ways:

Focus at rehearsals, being especially attentive when learning something new.

Don’t give the internal child-handlers a hard time.

Bring an extra set of clothes, as well as a jacket and a scarf, in case it gets cold.

Write everything down in your script.

Be kind to everyone in that room.

Have a fantastic time!

None of us is putting any undue pressure on her. She puts enough on herself already. All I’m hoping for is that the experience is a positive one, and that she comes out on the other side with greater appreciation of what theater actors go through.

If she decides this won’t be for her, so be it. But, the next time she sees a show, whether in New York, Manila or anywhere else in the world, she’ll know exactly what goes into such a production and give hearty applause not only for what she sees onstage, but for what happens behind it.

“Once on This Island” begins previews at the Circle in the Square Theater on Nov. 9, with an official opening night on Dec. 3.

Visit onceonthisisland.com for details. “Matilda” will run from Nov. 10 to Dec. 10 at the Meralco Theater. Visit ticketworld.com.ph for tickets.

This Friday and Saturday at 8 p.m., I will be making my Dubai concert debut at the Dubai Opera! My brother Gerard will be my musical director and we’ve prepared a lot of fun songs. Hope to see you there! Tickets are available at dubaiopera.etixdubai.com.

Read Next
‘Bhoy Intsik’ goes to London
EDITORS' PICK
Every Filipino home can now be a smart home with realme TechLife
PLDT Home Prepaid WiFi customers now under the care of Smart
Nestlé Philippines’ ‘NESCAFÉ Plan’ bags Grand Anvil at PRSP 56th Anvil Awards
Wesley So officially a US citizen
‘Pilgrim of peace’ Pope Francis heads to war-scarred Iraq
WHO: Arrival of vaccines in PH ‘a powerful step’ towards economic recovery, normalcy
MOST READ
Kris Aquino dispels rumors on son Josh getting married, thanks Ogie Diaz for defending him
LTO’s P500-M deal for screws draws scrutiny
Wesley So officially a US citizen
Ginebra trades Slaughter to NorthPort for Standhardinger
Don't miss out on the latest news and information.