The Wenn Deramas comedy, “Ang Tanging Ina Mo,” and its lead actress, Ai Ai de las Alas, were named best picture and best actress at the Famas (Film Academy of Movie Arts and Sciences) awards held on Friday night at the Tanghalang Leandro Locsin of the National Commission for Culture and the Arts (NCCA) in Intramuros. 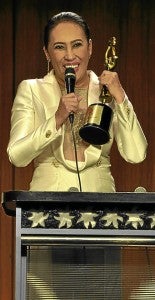 Joey Luna bagged the best production design trophy for “Rosario.” The best theme song award was given to “Miss You Like Crazy.”