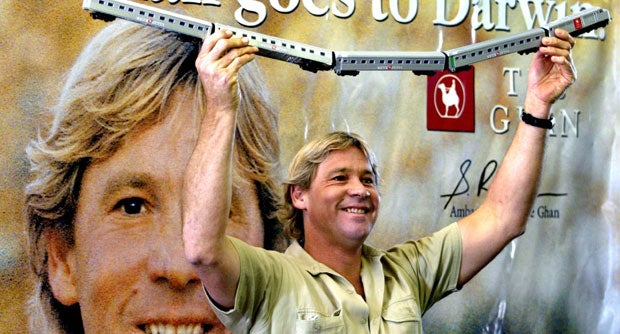 This file photo dated June 19, 2003, shows Steve Irwin, recognized worldwide as “The Crocodile Hunter,” holding a model train at a Sydney launch for a new train service. The cameraman who witnessed the death of Australian “Crocodile Hunter” Steve Irwin revealed on March 10, 2014, a stingray stabbed at him “hundreds of times” and his final words were “I’m dying.”  AFP

Its been over a decade since famed zookeeper and animal wrangler Steve Irwin died doing what he loved best—being close to nature and wildlife.

But after reviewing a bootleg video from his tragic accident in 2006, one doctor is claiming that Irwin “didn’t have to die” since his demise could have been easily avoided.

While filming an underwater documentary entitled “Ocean’s Deadliest,” the then 44-year-old Australian TV personality was fatally stabbed in the heart by a stingray barb.

Although he wasn’t there to see Irwin’s condition in person, US-based Dr. Gabe Mirkin claims that Steve unknowingly hastened his demise by pulling the barb out of his chest.

“The stingray tail effectively acted as a plug, and the second he removed it he bled to death,” the medical professional told the Radar Online. “Steve Irwin didn’t have to die.”

Dr. Mirkin’s assumptions were based on a footage by Irwin’s cameraman Justin Lyons, which was recently leaked after being stolen and copied under suspicious circumstances.

“The truth is, Steve was so badly wounded nothing could’ve saved him, given the remote area where it happened,” a close fried of Terri was quoted as saying in a Woman’s Day report.  Khristian Ibarrola /ra