TORONTO — A film that finds the comedy and humanity in Tonya Harding is the biggest acquisition of the Toronto International Film Festival. 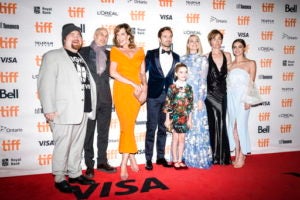 The cast and director of “I, Tonya” arrives for its screening during the Toronto International Film Festival in Toronto. AP

Domestic distribution rights for “I, Tonya,” starring Margot Robbie as the Olympic skater, were on Monday bought by a pair of new companies, Neon and 30West. Trade reports pegged the price at $5 million.

The film had been the hottest property in Toronto, which many predicting Oscar nominations for Robbie and co-star Allison Janney. The film’s producers said it has been “a whirlwind few days” since the movie’s well-received premiere.

Louis C.K.’s black-and-white “I Love You, Daddy” also sold for a similar amount to the Orchard on Monday.