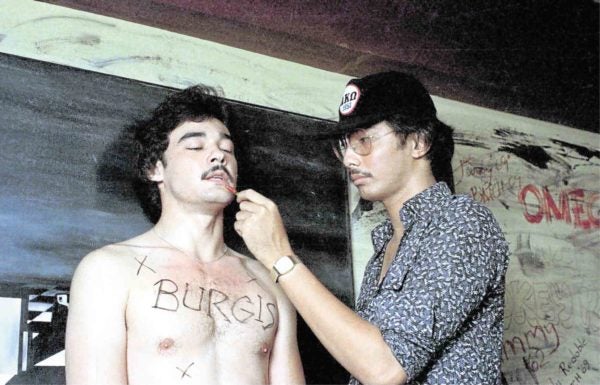 Filmmaker Mike de Leon is not known to mince words.

In a speech prepared for the premiere of the restored classic, “Batch ’81,” at the Venice International Film Festival, on Sept. 5, De Leon spoke out on myriad issues affecting our country: from the specter of martial law to the resurgence of violence in our streets.

Since De Leon was not able to travel to Italy for the event, he had asked that his speech be read by Asian Film Archive’s Tee Pao Chew, who spearheaded the restoration along with colleague Karen Chan.

In his speech, De Leon recounted the conditions under which the film was created—during the waning days of the martial law era.

That was more than three decades ago, he recalled, “during a time of great political unrest and turmoil, when [the Philippines] was under the [tyranny] of history’s most infamous conjugal dictatorship, Ferdinand and Imelda Marcos.”

Three years later, he made another defiant film “Sister Stella L” or “Sangandaan (Incroci),” which competed in Venice.

De Leon pointed out that “Batch ’81” and “Sister Stella L” “reflected those times in exploring the creation of the fascist mindset, as exemplified by activist nuns and school fraternities.”

He recounted that the Marcos regime was “peacefully overthrown by a mass protest … called ‘People Power” in 1986.

“We returned to a democracy if only on the surface, and no matter how imperfect or fractured the system was, it was still a time of renewed optimism,” he explained.

He noted that the message of “Batch 81” remains as timely as ever. “That [it] still resonates in my country is concerning, although in some ways expected,” he stated. “Sadly, it seems that incipient dictatorship is again rearing its ugly head. In this environment, extrajudicial killings continue unabated under the guise of a war against illegal drugs, the Constitution and rule of law are blatantly disregarded, political leaders and even Supreme Court justices are cowed into submission and a professional army of social media trolls viciously attacks online dissent.”

De Leon was unequivocal: “History is being blatantly rewritten and the martyrdom of countless martial law victims is denigrated as stupidity and a dictator is given a hero’s burial in the dead of the night.”

He asked, rhetorically: “In this situation, what can one film do? Nothing much … in fact, very little.”

He remained hopeful, though. “But there are still countless Filipinos who share my apprehension and are not afraid to speak out. We will not allow our country to be dragged back to those dark times—a situation best described by the blurb on the film’s original poster: ‘A secret world where freedom is obedience, and authority is violence.’ Only this time, this world of unbridled brutality is no longer a secret.”

In his speech, he also expressed his gratitude to Marichu Vera Perez Maceda who produced the film and David Pozzi and L’Immagine Ritrovata for the “wonderful restoration.”

Still, the big question begs to be answered: Will the restored “Batch ’81” ever see the light of day in local cinemas?

De Leon and other inquiring minds would like to know.