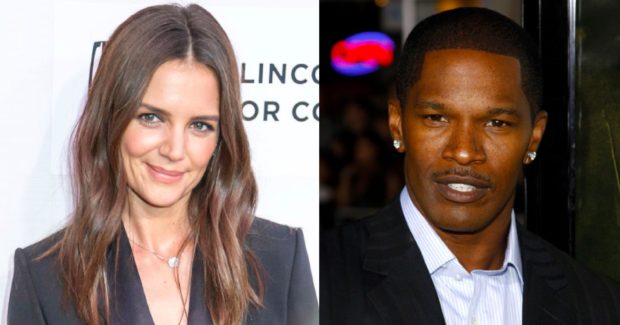 Katie Holmes and Jamie Foxx have been rumored to be an item for years. Images: INQUIRER.net stock photos

Jamie Foxx and Katie Holmes appear to be going public with their long-speculated relationship.

After years of denial and unconfirmed rumors, the Hollywood actors were seen holding hands in a Malibu beach, reports Daily Mail, which put out paparazzi photos of the pair.

Both were wearing fedora hats and shades, with Foxx in a black shirt and sweatpants, and Holmes in a knee-length blue dress.

The “Dawson’s Creek” star divorced from Tom Cruise after a six-year marriage in 2012; the two met through him as he had starred in “Collateral” with Foxx.

The actor hasn’t been married and has two daughters, while Holmes is mom to one, Suri, with her ex-husband.

Rumors that Holmes and Foxx were an item started in 2013 when they were seen dancing at a party in the Hamptons, according to Daily Mail. The “Django Unchained” actor laughed off the supposed rumor the same year.

Despite being immensely private, the pair would be seen together more often. In 2015, Us Weekly obtained a photo of the two holding hands in a recording studio.

In 2016, a friend of Foxx’s said they were “happily dating” but would go on to backtrack on her statement.

Eyewitness reports have stated that the two have been seen vacationing in Cabo, New York and Paris during the past year.

The beach photos are the first time that their affections have been made public, and the internet seems to be a hundred percent behind it, based on online reactions.

Many were overjoyed that Holmes was with someone other than Cruise, a practicing Scientologist who was allegedly controlling over all his partners because of his religion.

Is it wrong that my first thought at Jamie Foxx and Katie Holmes is .. she deserves. She has earned someone with some level of chill

KATIE HOLMES AND JAMIE FOXX. I AM LIVING. GET THAT FREEDOM. ENJOY THAT BEACH. WEAR THOSE HATS. YES. GET IT. ALL. pic.twitter.com/EHUfC6u0W4

Others weren’t the least bit shookt:

Considering how public Holmes’ romance was with Cruise—nothing gets more outspoken than your boyfriend jumping on a couch to profess his love on “Oprah”—they can’t be blamed for keeping things beyond low-key. Niña V. Guno/JB