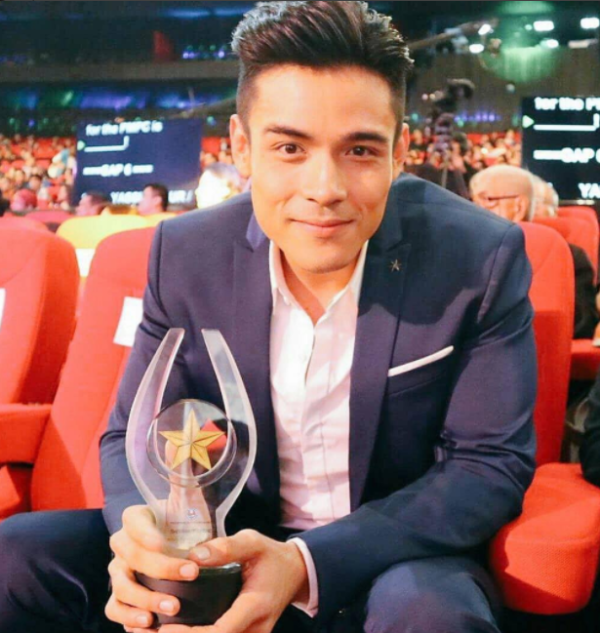 It was his performance in the 2016 comedy-drama movie “Everything About Her” that earned him the honor. The movie gave him a chance to star alongside the legendary Vilma Santos and actress Angel Locsin.

He wrote about his gratitude through a lengthy Instagram post. First, he thanked the Philippine Movie Press Club for the recognition. He also thanked ABS-CBN’s film production unit Star Cinema for entrusting him with the project. He then acknowledged his co-stars for the experience of working with them.

“Kinakabahan talaga ako sa stage kagabi kaya hindi ko nacompose sa isip ko ang mga dapat pasalamatan. (I was really nervous on stage last night, that’s why I wasn’t able to compose in my mind a proper acknowledgment.) To my mother Vivian Rabaya, Ms. Vilma Santos, I will forever treasure all the wisdom you have given me. Thank you for making me understand a whole lot about life and our industry. To Jaica, Ms. Angel Locsin, maraming salamat at ginawa mong masaya ang bawat eksena natin! (… Thank you so much for making our every scene enjoyable.)”

He also thanked his director Joyce Bernal for “believing in me and pushing me. napakadaming pangalan kailangan banggitin at nakasama sa journey na ito (there are so many names that must be mentioned for being with me in this journey) pasensya na po at nakaka kaba talaga ang speech (my apologies but the speech really made me nervous) 😅 love you all!”

This year’s Star Awards for Movies witnessed the union of two of the most glorified actresses in Philippine entertainment history, Vilma Santos and Nora Aunor. Both movie queens bagged Best Actress awards. The Star for All Seasons won via “Everything About Her” while the “Superstar” won hers through her indie film, “Kabisera”.

Besides their acting recognitions, both actresses were also cited as Ginintuang Bituin ng Pelikulang Pilipino special honorees, as recognition of their careers which have spanned fifty golden years. JB

TAGS: 33rd PMPC Star Awards for Movies, Everything About Her, Xian Lim