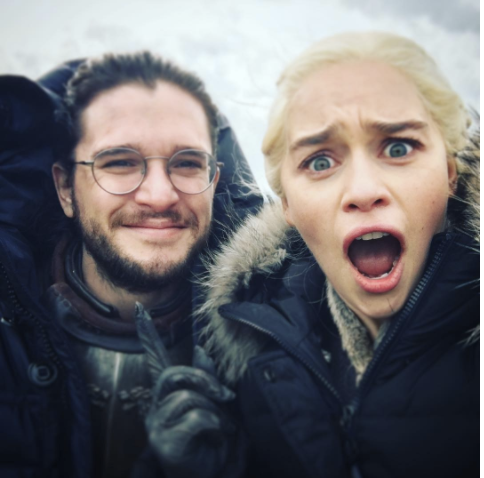 Editor’s Note: This post contains spoilers from the “Game of Thrones” season 7 finale

The final episode of the seventh season of HBO’s “Game of Thrones” was truly an action-packed 81-minute affair filled with pulse-raising developments until the end.

Apart from opening the gates to the looming Great War in Westeros, the episode “The Wolf and the Dragon” featured the consummation of the undeniable sexual tension between the show’s two biggest stars, Jon Snow (played by Kit Harington) and Daenerys Targaryen (Emilia Clarke).

Given the recent revelations of both character’s family lineage, the actors admitted a certain level of “weirdness” while filming the now iconic sex scene.

In an appearance on an “HBO Behind the Scenes” special, Clarke recalled how the “weird” scene with her good friend Jon made her gag.

“The reality of what they are to each other, I don’t know how that’s going to… I think [gagging] might be the reaction,” she said.

Harington, on the other hand, explained further the repercussions of their characters’ actions.

“But it’s that thing, when you suddenly feel that deeply about someone and you go through these events together, it’s like a runaway train.”

He added: “Usually you start working on a movie and meet [a co-star] for the first time and you develop chemistry on screen over time. Here, you know somebody for seven years and you’ve watched their character on screen all that time. So it’s a unique experience as an actor to come together and know the world is watching.”

Meanwhile, the air date for the show’s final season remains undetermined, with reports claiming it could be sometime in 2019. /ra