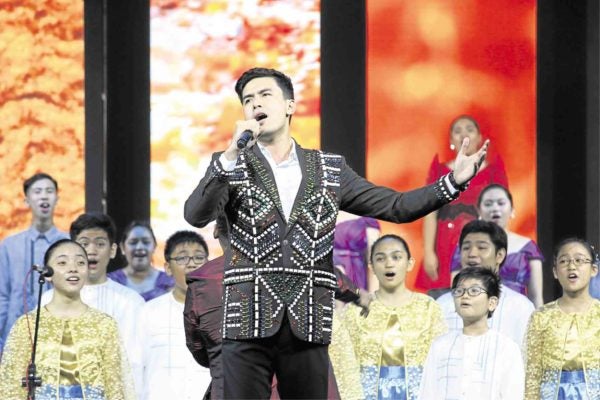 One thing Christian Bautista has learned from performing all around Southeast Asia is that music transcends language barriers. Particularly  potent, he pointed out, are ballads, for which Filipinos and audiences in neighboring countries have a shared affinity.

“We love listening to beautiful melodies and harmonies—that’s something we all have in common when it comes to music,” Bautista, whose success in the region made him a suitable choice to be the country’s representative in the recent Association of Southeast Asian Nations (Asean) Pop Concert, told the Inquirer in an interview.

True enough, the show—which featured one music act from each of the 10 member states of the organization—was dominated by melodious mid-tempos that infused either traditional influences or modern sounds; and by songs about love, both romantic and patriotic.

Bautista regaled the crowd at the front lawn of the Cultural Center of the Philippines with his new single,“Kapit,” an anthemic tune laced with electronic beats.

Indonesia’s Mia Ismi Halida played the violin as she performed a medley of folk tunes. Lotchana Anoulack sang “The Jewel of Mekong,” a sweet-sounding song about the beauty of Laos.

Singapore’s Aisyah Aziz had the crowd cheering after showing off her powerful pipes and piercing falsetto in “Mimpi.” Afiq Wafi of Brunei sang “Sepenuhnya,” his original composition with discernible traditional instrumentations. All the while, clips of scenic views in Southeast Asia played on the screens behind.

Thailand’s Natthika Iamthamai delivered an impassioned rendition of “Suk Wun Neung,” which could well pass off as an OPM song. Malaysia’s Dhiya Suhaili Ghani, on the other hand, put some jazzy inflections to “Gemilan”—about a girl trying to fulfill her dreams.

Amid the night’s balladry were upbeat performances that provided a refreshing change of pace. Eaint Chit of Myanmar quickly had the audience going, dishing out semi-rapped lines in “Beyond the Success,” a hip-hop-inspired song with a catchy chorus.

Vietnam’s Hai Nam Le professed his love for his country with “My Vietnam,” a soaring anthem with a sprightly rap break. Meanwhile, Kong Sothearith, had the people cheering with his cheeky dancing in the pop-rock ditty, “Love Me Baby.”

Though the nine foreign artists in the roster sang in their respective native languages, the music, it seemed, was enough for them to make that crucial connection with the Filipino crowd. “Music is a universal language. So, while we speak different languages, the love is always there,” Halida said.

Halida also said that the musical event, which was mounted with the help of the National Commission for Culture and the Arts, was a welcome platform to meet fellow Asian artists and know more about their music.

Aziz echoed Halida’s sentiments, saying that language wasn’t a hindrance in forging friendships. “We were able to sing, harmonize well,” she said. “I hope we inspire other people to make friends with our fellow Asean citizens.”

Aside from their solo numbers, the performers also gathered for the singing of the “Asean Song of Unity.”

Joining them onstage were the Coro San Benildo, Hail Mary the Queen Choir, UP Manila Chorale and the Tinig ng Calamba Choir.

The one-night concert, which was part of the Asean’s weeklong 50th anniversary celebration, was punctuated with the lighting of the Asean Lantern, led by National Artist for Literature Virgilio Almario.