Elon Musk and Amber Heard have confirmed through social media that they had separated, saying, though, that they remained on good terms.

Netizens noticed that following their rumored split, the Tesla and SpaceX CEO was still liking his ex-girlfriend’s social media posts.

Musk left the comment “V cute” with a heart emoji on Heard’s post where she imitated The Little Mermaid. 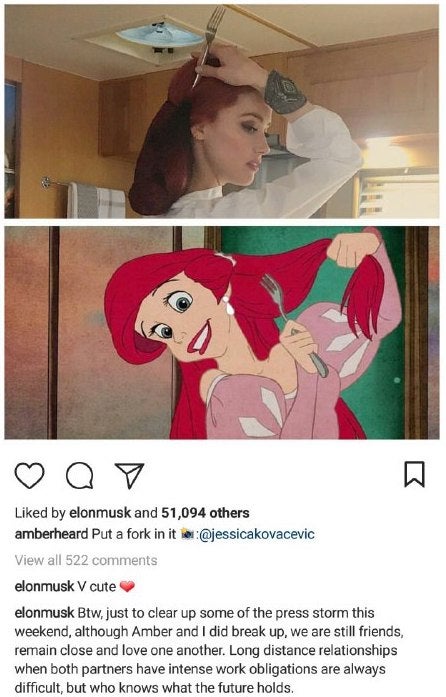 He went on to clarify their relationship status in another comment: “Although Amber and I did break up, we are still friends, remain close and love one another.”

The South African even hinted at a chance of a reunion: “Long distance relationships when both partners have intense work obligations are always difficult but who knows what the future holds.”

After this, the “Aquaman” actress shared photos on Instagram of the words “give,” “love”,and “joy” in rose petals and explained that she was speaking up because “being in the public eye means having to explain yourself to so many people, so much of the time.”

While she wanted to “remain more quiet,” she elaborated that she and Musk “care deeply for one another and remain close.”

Being in the public eye means having to explain yourself to so many people, so much of the time. In this case, I’d like to remain more quiet. Although we have broken up, Elon and I care deeply for one another and remain close. Thank you for the continued support, respect, and privacy during these difficult, very human times.

The former couple dated for about a year following divorces from their previous partners. Musk was married to second wife Talulah Riley until October 2016, while Heard filed for divorce from actor Johnny Depp in May 2016 following allegations of domestic violence.

The pair kept their relationship low-key and Heard was even able to meet Musk’s five children three months ago. It appears that the relationship struggled as Heard has been in Australia for the “Aquaman” shoot where she stars as Mera, Queen of Atlantis. Musk is based in Los Angeles, where his companies’ headquarters are located.  /ra