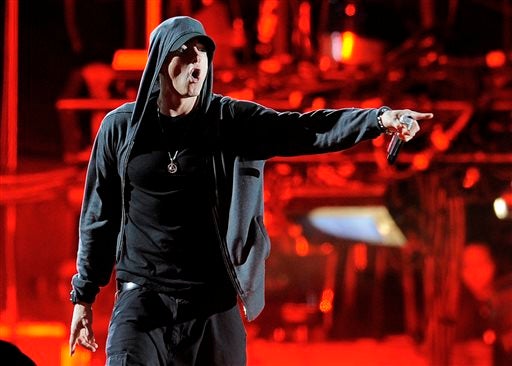 Shady’s back, well in a few months at least.

Fans of American rapper Marshall Mathers, best known as Eminem, are utterly delighted, as his ninth studio album is expected to come out in the latter part of 2017.

Almost four years removed from the massive success of “The Marshall Mathers LP 2” in 2013, the “Rap God” singer is indeed back inside the studio and cooking up some fresh beats, music industry insiders Hits Daily Double confirmed.

The 44-year-old hip-hop icon first teased the making of a new album last year, when he debuted an anti-Donald Trump freestyle rap called “Campaign Speech” during the elections.

“Don’t worry I’m working on an album! Here’s something meanwhile,” he wrote on Twitter, along with a link to the diss track.

Aside from music, Eminem is working his hands on producing a new comedy film, “Bodied,” which follows the story of a university student that writes a controversial thesis on the rap battle scene.  Khristian Ibarrola /ra

Read Next
Aljur Abrenica overjoyed, humbled by son’s birth
EDITORS' PICK
Acer starts the year off strong with the Aspire Vero National Geographic Edition
SSS: Members on home quarantine due to COVID-19 can apply for sickness benefit
Kalinga, Ifugao, Mt. Province, N. Samar will be under Alert Level 4 from Jan 21-31
Mobile COVID-19 vaccination for commuters, transport workers set at PITX
PH to send 584 athletes, 161 officials to Vietnam SEA Games
Gear up and get ready to play with Yamaha Mio Gear
MOST READ
Imelda Marcos trends on Twitter after octogenarian jailed for allegedly stealing mangoes
Mayor Vico counters vice mayor: ‘Did I say anything about his family?’
Municipal court in Pangasinan sets arraignment for ‘Lolo Narding’
‘Unbelievable!’ Pacquiao hits DA’s plan to import 60,000 MT of fish
Don't miss out on the latest news and information.