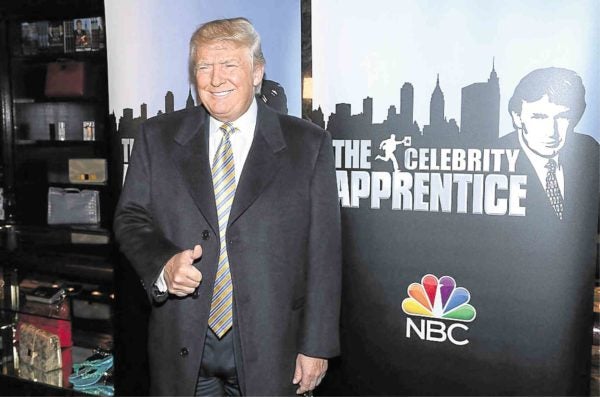 Before he decided to run for US president, billionaire businessman Donald Trump boosted his popularity by becoming a TV star, by way of the hit reality show, “Celebrity Apprentice.”

In the star-studded show, Trump presided like an all-knowing and all-powerful poo-bah who ended each telecast by firing a stellar apprentice.

Trump was a perfect fit for the show, and vice versa, so it ruled the ratings for several seasons, making him a super-celebrity in his own right.

Later, the show was hosted by other popular stars, like Arnold Schwarzenegger, but they failed to connect with viewers, and Trump loftily chastised them for “undoing” the format he had made a TV byword.

Despite that downbeat denouement, Trump himself had already benefited enormously from the hit show, and his TV-enhanced visibility and acceptability to the viewing masses gave him the courage and gumption to aim for the highest office in the land, despite his lack of political experience.

Flash forward to 2017, and Donald Trump has achieved his “impossible” dream. His victory has perplexed many politicians and pundits, so they have been scrounging and fumbling around for ways to better “understand” The Donald, and how he has amazingly trumped everybody else.

This universal consternation has prompted some viewers to hark back to the old “Celebrity Apprentice” show where it all began, and to re-view it to look for nascent and prescient “clues” to the new US prexy’s astounding world-changing mojo and moxie.

Fortuitously, the show has been reissued for the retroactive education and edification of younger viewers, and many of them have been watching it anew or for the first time, to figure out the “secret” to Trump’s historic feat.

And, what have they been finding out? Viewing the show again after a decade, we can intuit that Trump’s unique “hook” as host, and now his country’s commander in chief, is his unique combination of “just folks” chumminess and absolute autocratic power.

The power-tripping is no surprise, since rich men like him are used to getting their way—but, the rough and ready “just folks” appeal is unexpected and thus disarming.

On “Celebrity Apprentice,” Trump uses his twin strengths and “hooks” in inspired alternation, to get the otherwise self-centered stars in his temporary “employ” to do his bidding.

And, when he’s at his best and most archly ferocious, he reduces his stellar apprentices to pawns, cogs and minions by wielding his strengths with ambidextrous fury!

Granted, now that he’s president, Trump has been discovering to his chagrin that running a country is not as simple as hosting a hit TV show!

With his real popularity ratings at a deep-freeze low, he has to radically change the way he’s playing the political game—before he ends up being fired!

Read Next
Film fest fever or fatigue?
EDITORS' PICK
The Best Tech Gifts For The 2022 Holidays
House energy committee chair Arroyo bats for cheap electricity
Bongbong Marcos: Oil search in West PH Sea may skip ‘gov’t to gov’t’ talks
The vivo Y16 makes the season of giving more thoughtful for the whole family
Fare card prices soar amid shortage
US has ‘many requests’ on Edca, Bongbong Marcos says
MOST READ
SSS: Pensioners 13th month, year-end benefits to be released first week of December
LOOK: Kris Aquino visited by ‘Kris TV’ sidekick Darla Sauler in US
US has ‘many requests’ on Edca, Bongbong Marcos says
Not just a consultant, military says of slain Red leader
Don't miss out on the latest news and information.