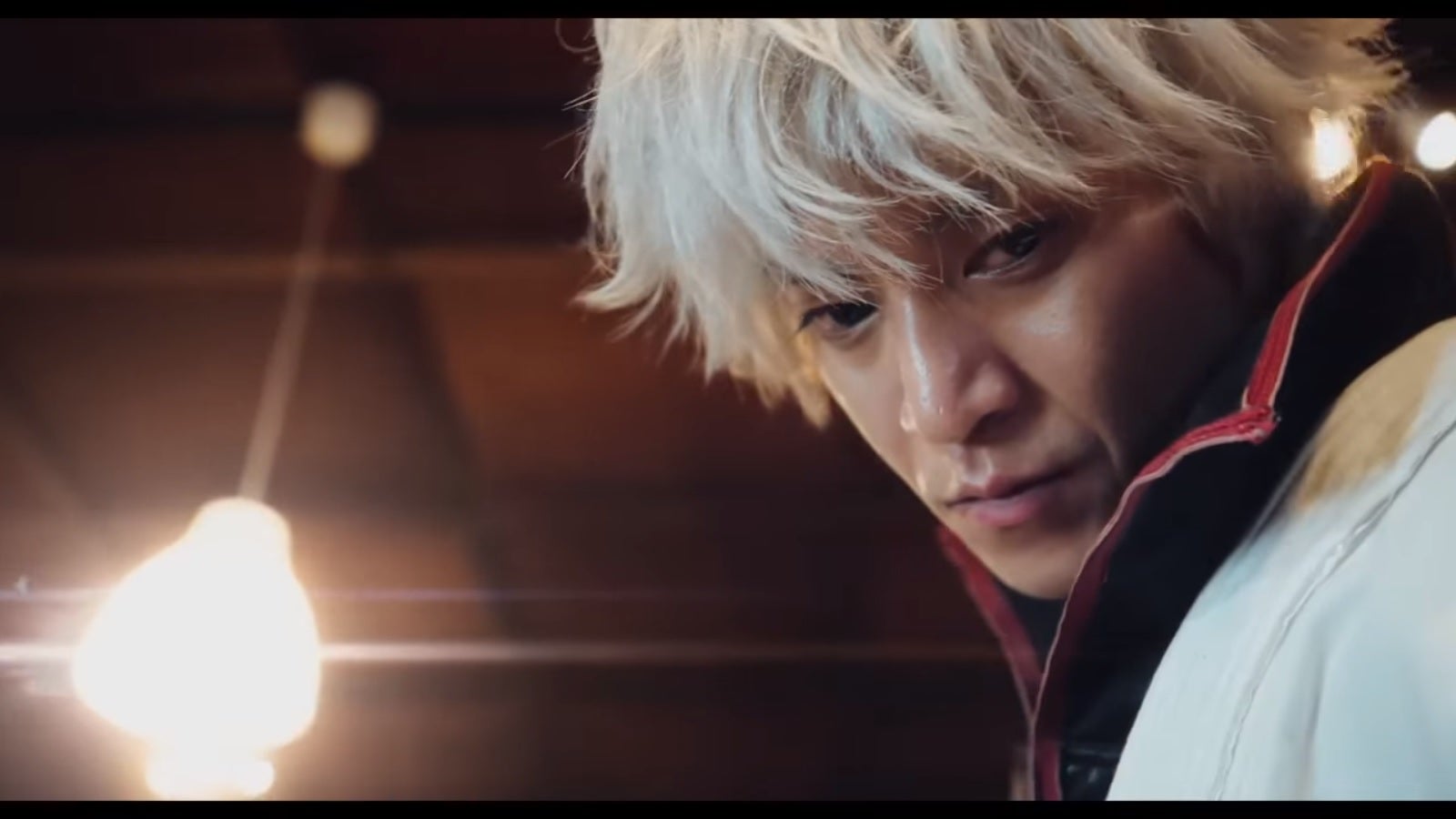 Here comes the stupidest samurai in the universe! The live-action film adaptation of “Gintama,” the blockbuster manga serialized in the Shukan Shonen Jump weekly magazine since late 2003, has finally hit theaters in Japan.

With the number of copies printed exceeding 51 million, “Gintama” has laughs, affection, battles and just about everything else. A sci-fi period fantasy by Hideaki Sorachi, the manga has an outrageous premise: The samurai warriors from the tumultuous years leading up to the Meiji Restoration take on invading space aliens.

The aliens are quickly gaining power, forcing the samurai into a degenerate state. One samurai, Sakata Gintoki (played by Shun Oguri), used to fight against the invaders and was feared as “a vicious white demon.” But the protagonist has replaced his real sword with a wooden sword while running a general store in Edo (now Tokyo) and living a leisurely life with his clerk, Shimura Shinpachi (Masaki Suda), and freeloading female companion Kagura (Kanna Hashimoto).

One day, Gintoki learns his former comrade Katsura Kotaro (Masaki Okada), has gone missing after being attacked by a swordsman. To rescue Katsura, our hero once again takes up arms.

The manga has gained a following thanks to the colorful characters and over-the-top gags.

Gintoki, for example, cuts a dashing figure but is also a candy-addicted slob, while Shinpachi is a pathetic otaku-type conspicuous for his glasses. Kagura is similarly no ordinary heroine — she even picks her nose and throws up.

Many of the characters have names similar to those of historical or mythical figures from the pre-Meiji period. For example, the manga introduces a group called the Shinsengumi — the name of the Tokugawa shogunate’s legendary samurai police force. The manga version, however, uses a different kanji character for “shin” and counts among its members a naked stalker, a mayonnaise addict and a hardcore sadist.

Anything goes in the manga, but can that kind of world be adapted into a live-action film? Director Yoichi Fukuda took on the challenge.

Many internet users have noted that “Gintama” utilizes the same sort of humor as “Yusha Yoshihiko,” a TV drama directed by Fukuda. He initially regarded the manga as a rival work but was fascinated after reading it.

“I didn’t want to disappoint fans with my film adaptation of ‘Gintama,’” Fukuda said. To ensure an accurate film portrayal of the manga, he took four times as long as usual to write the screenplay.

The author of “Gintama” also referenced “Yusha Yoshihiko” when commenting on the film adaptation. “I was so jealous that I hoped this guy would die,” Sorachi said, praising Fukuda in his own unique fashion.

Fukuda freely mixed his own jokes into the film adaptation, including parodies of TV shows.

“It’s difficult to add jokes to an existing work, but I was confident that my jokes would go well with ‘Gintama,’” the director said.

Of course, jokes are not the only distinguishing features in “Gintama.” Each character has unique convictions and values, and there are a few tear-jerking scenes, as well as dramatic action sequences. In the climax, for example, Gintoki and his rival, Takasugi Shinsuke (played by Kinki Kids member Tsuyoshi Domoto) fight each other on a flying ship in the sky.

Fukuda resolved to produce a live-action film that portrays dreams like an anime or manga would. For example, computer-generated images used for the background in many scenes initially look very realistic but are then altered to look unreal or artificial.

“I thought [those realistic images] made it difficult for the characters to stand out,” Fukuda said. “So I asked [the CGI staff] to make them like ‘Mary Poppins.’ I wanted 10 to 20 percent of the film to have anime-like qualities.”

Even before playing Gintoki for the film, Oguri himself had already “appeared” in the manga — as Oguri Shunnosuke.

“It feels strange because I never thought I would play Gintoki,” the actor said. “I just gave it my all, leaving the comedy bit to the director. The film has the loose, easygoing feel of the original. We made a weird film, I think.”

When asked for his view on his manga’s film adaptation, Sorachi, who rarely makes public appearances, responded crudely, calling it a “kuso eiga,” which translates as “crap movie.” “I can’t raise the bar too high, so I don’t want to say it’s definitely funny … well, it was actually funny,” he conceded.

Describing his work as a sinking ship, Sorachi said, “If there are people who say they still want to board the ship and if they are the ones making the film, I’d love to see them produce another version of ‘Gintama,’ even if it ends up flopping.”

Sorachi had turned down all the other requests to adapt his work into a live-action film, but he finally agreed this time, citing Fukuda’s stewardship of the project.

On the recommendation of one of his staff members, Sorachi said he had watched “Aoi Honoo,” a TV drama adaptation of a manga directed by Fukuda. “Jiro Sato in the drama was fantastic, so I wanted [my manga’s film adaptation] to have Mr. Sato, rather than the director,” the author said with a typical dig, hinting at his deep trust in Fukuda.

Sorachi asked the director to add new jokes that would work in his film. “Watching my own jokes on screen is embarrassing,” the mangaka said.

How does he create attractive characters with distinctive personalities? “First and foremost, there’re jokes I want to make,” he said. “Then I think of a character who can fit them. Then the character takes on a life of his own.”

Sorachi humbly described his own manga as old hat.

“You never go off it because anything goes in the manga,” he said. “If you get tired of jokes, you can go serious, and vice-versa. I’ve made it this far probably because I go off things every so often.”

Visit wwws.warnerbros.co.jp/gintama-film/ for more information on the film.