John Prats: No to show biz career for my daughter until age 16 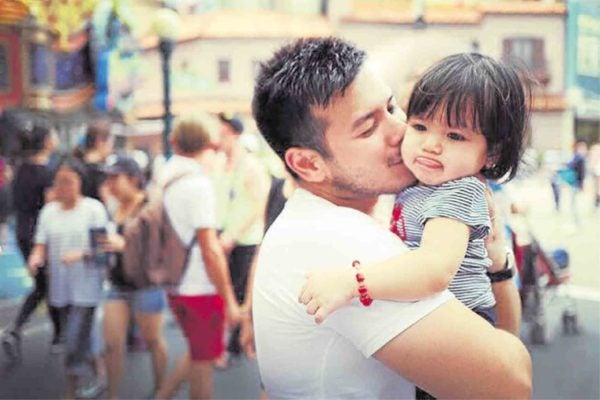 “I don’t want to rob her of her childhood,” said actor John Prats of daughter Lily Feather, who turned a year old in April.

If he could have his way, John, who became an actor at age 8, would not allow his child to join the biz until she is old enough.

“Maybe when she turns 16 or 17,” the actor said. His sister, Camille, started acting way earlier—at age 5. “Maybe Feather can do TV commercials with her mom, but that’s it.”

“I’d like to think that I grew up normal. I only taped (for ‘Ang TV’ in the 1990s) every Saturday and that was just like play to me. I know I’ve missed a lot while growing up. I don’t want that for her,” said the “FPJ’s Ang Probinsyano” cast member.

Too early to tell

John said it was different for his nephew Nathan, Camille’s son with late husband Anthony Linsangan. “He is 9 and we could see that he is really interested in the arts. He dances and does commercials. He even asked his mom if he could join ‘Goin’ Bulilit.’ With Feather, it’s still too early to tell.”

Fatherhood suited John, many observed. “I guess they’re right,” he reacted. “It’s so fulfilling to be a father. I’m happy that Feather is now old enough to interact with us. Her first word was ‘mama.’ It’s because she is always with Liv (Isabel’s nickname). Between us, Liv is the disciplinarian. I’m her opposite—Feather goes to me if she wants a particular toy at the mall because she knows I will buy it for her.”

The 33-year-old John added: “I’ll probably be strict with Feather when she becomes a teenager. Right now, I just want to enjoy [time with] her first. I get scared when I imagine her being all grown-up, although I believe that raising your child well will make a big difference.”

John said he could relate to the emotional struggles of his “Banana Sundae” costar Pokwang, whose daughter Ria Mae would be leaving for Paris to study. “I told her that life is really like that. You can’t keep your child from leaving especially if her reason is to fulfill her dreams. I don’t know how I would handle that problem when it’s my time to face it.”

He said it was good that he had Isabel to help him make crucial decisions. “Liv is a hands-on mom. It’s OK with her not to work until Feather is old enough to be left to a nanny. Recently, I’ve been working almost every day,” said John, who is also a cast member of “Ang Panday,” an entry in the 2017 Metro Manila Film Festival.
“Liv would often tell me she misses me, but we share the same motivation. We have goals as a family, so we both make sacrifices. Recently, we were able to buy a lot. We’re saving up so we can build our house there.”

John said Isabel missed working, too, but whenever the actress was away—like taping for shows such as “Ipaglaban Mo” or “Maalaala Mo Kaya,” she would miss Feather so much.

“Liv is the clingy type. If she could buy a trailer truck to bring Feather to every taping location, she would. Like me, she doesn’t want to miss any important moment in our daughter’s life.”