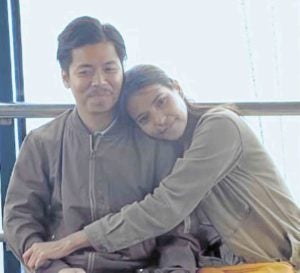 “I was really surprised,” she told the Inquirer. “But I was more stunned by the good reviews. Even those who are not from the film industry suddenly became critics. It’s heartening that there is discussion [about it]. That people are dissecting the story and analyzing why they liked the movie.”

Small movies that don’t boast marquee names usually get yanked out of theaters before the weekend. That wasn’t the case for “Kita Kita,” which opened last week to rave reviews and SRO screenings.

“I was told that we had 120 theaters at the start,” Sigrid recalled. “Then, on the second day, we got 150. We just kept adding cinemas, as the days went by.”

It was a “surprise,” not only for the filmmaker, but for the entire industry, as well.

The odds were clearly stacked against the movie—primarily because it didn’t employ the usual rom-com stars in the lead.

Comedian Empoy Marquez and dramatic actress Alessandra de Rossi aren’t exactly renowned as box-office sensations in the conventional sense. He was always the “funny man,” and she was hardly the “leading lady” in their projects on the big and small screens.

“I realized that these actors were boxed in by how the audience perceived them,” Sigrid pointed out. “Everyone had the same perception of the actors. That is how I got the idea of making one of the characters blind, because we usually judge people by what we see. So what if the girl cannot see the other person. Will she still fall in love?”

The “impairment” concept, however, proved to be a blessing for a movie that had been “handicapped” by so many factors beyond the filmmaker’s control.

Coincidentally, Sigrid was in a similar bind as her movie’s heroine during filming. “At the time, I had a broken ankle and, in a way, experienced how it felt to be a PWD (person with disability).”

She felt “hopeless.” “It was as if I could not do anything on my own,” she recounted. “But I want to show everyone that having a disability is not an excuse. I shot and finished this movie with crutches and then eventually, a cane.”

It was all worth it, a personal victory made sweeter every time she hears or reads glowing feedback from friends and strangers, in the real and cyberworlds.

“I am really happy with the overwhelming response from our kababayan,” she quipped.