Since the beginning of time—or at least since movies about superheroes started to be made, which was around the 1940s—only a handful of these starred a female superhero on her own.

Marvel in particular has a lot of catching up to do: While it has featured women and men fighting side by side, out of the live-action films they’ve been churning out, “Elektra” (released in 2005 starring Jennifer Garner) is the lone female-led film.

Over 30 films from various studios and nearly 15 years later, one of the Marvel Universe’s strongest heroes, Captain Marvel, to be played by Brie Larson, will finally have her time to shine. 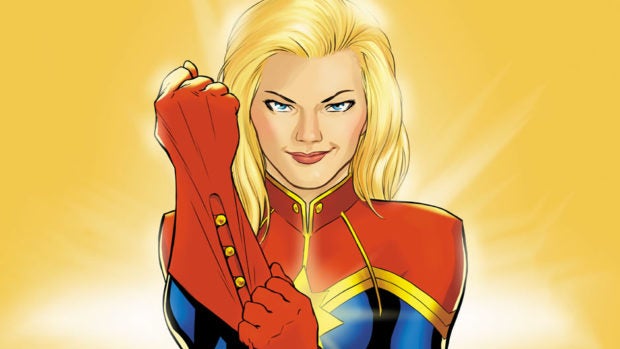 It’s only 2017 but the hype has already begun: At this year’s San Diego Comic Convention, her fierce and functional costume was revealed to audiences.

I’ve been staring at this blurry concept art for Captain Marvel for so long it’s ridiculous. The @McKelvie design is truly GOAT level 🐐 pic.twitter.com/TY7zq4L5Ag

At Comic-Con, Marvel Studios head Kevin Feige revealed that “Captain Marvel” will be a prequel to “Iron Man.” The movie is set in the ’90s, and features Nick Fury when he still has both eyes.

Based on the concept art, Captain Marvel is seen battling the Skrulls, alien shape-shifters that have long been warring with the Kree and wanting to invade the Earth.

Since then, there has been so much social media buzz  that Larson said Twitter wanted to control her notifications (thankfully, she didn’t allow them to).

I think @brielarson is perfect for Carol Danvers!!! 💛 and I know the Captain Marvel movie is going to be awesome!#CaptainMarvel #BrieLarson pic.twitter.com/9OxmxeWDGf

While 2019 can’t come faster, here are a few things about the superhero we’ll finally meet onscreen:

She’s had to fight for gender equality since she was young.
Her father, not believing men and women were equal, chose to put her brother to college even if she was the eldest of three. She took her future into her own hands and joined the Air Force, rising to the top of her class. She did successful missions with Nick Fury, Wolverine, and even Black Widow.

She was first known as Ms. Marvel.
The original Captain Marvel is a male alien from the technologically advanced Kree race. While in an explosion, airforce pilot Major Carol Danvers absorbs his DNA and gains superpowers and becomes Ms. Marvel. She eventually takes the name of Captain Marvel in his honor.

There has since been a new Ms. Marvel, an equally cool Muslim teen named Kamala Khan.

She has cool superpowers and knows how to use them.
Since she was part of the air force, she already had important skills such as hand-to-hand combat, espionage and flying a plane.

A few of her superpowers are superhuman strength, the ability to fly faster than the speed of sound, and the ability to absorb energy and use it to make herself even stronger. All these put together, Captain Marvel makes for a stand-out superhero.

She’s part of the Avengers.
While Carol is fine saving the world on her own, she’s also been a team player and has fought alongside Captain America, Iron Man and Thor in the 1970s comics.

Sadly, she’s not part of the multitude of heroes that will be in “Avengers: Infinity War.” But with many more Marvel movies to go, no doubt she’ll be fighting once again with fellow superheroes as she has in the comics.