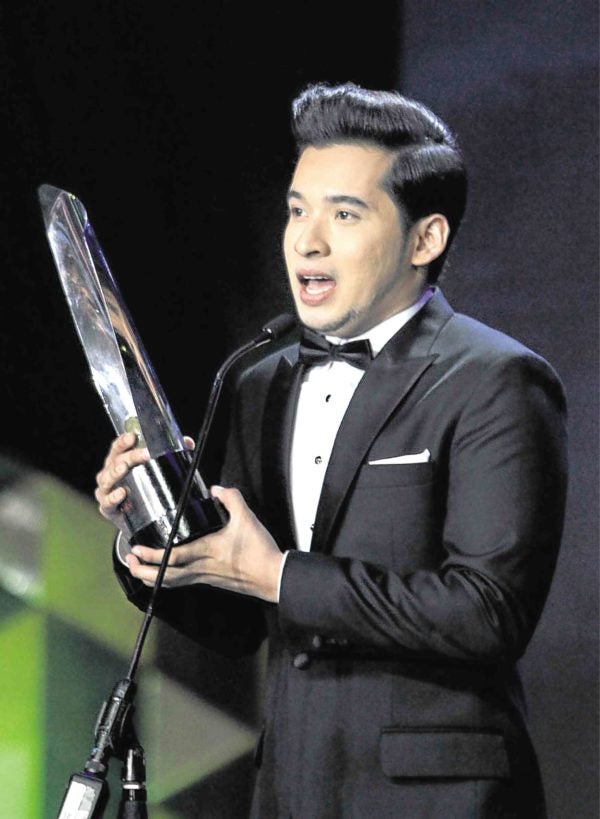 Christian Bables more than deserves the Urian best supporting actor award for his awesome portrayal of a gay man in “Die Beautiful” (DB). A week before the Urian, Christian told me that he was hesitant to attend the awards night because he was not sure what to wear. My advice to him was: It’s better to be underdressed than overdressed.

The way he cried like a baby upon being proclaimed the winner endeared Christian all the more to the public. His reaction was so heartfelt and genuine.

Since my gay son IC (Mendoza) worked with Christian in DB, they have a special bond. IC gets a kick out of posting playful comments on Christian’s Facebook and Instagram accounts, addressing him as Babe, in jest.

At first, Christian’s fans were alarmed, but he assured them that it was all in the spirit of fun. He fondly calls IC “my buang” (my crazy one).

What better way to celebrate his Urian victory than by starring in the movie, “Finally Found Someone,” with John Lloyd Cruz and Sarah Geronimo. Just like the title of their film (which opens tomorrow), Christian has finally found his niche in the biz.

Here’s my chat with Christian:

When can you say that you finally found “the one”? When I find “the one,” I want to wake up next to her every morning, and there’s nothing I won’t do to make her happy. Plus factors for me would be her being family-oriented, independent, kind, talented and sweet.

Is there a possibility for you to fall for a gay man? I love my gay friends like brothers. I would take a bullet for them. But I don’t see myself getting involved with them romantically.

How would you handle indecent proposals? I’m a straightforward person. I welcome pure friendship, but I will turn down indecent proposals politely. I’ll tell the person who’s offering it to me, “Sorry, but I’m not cheap.” I don’t need anyone’s money. I don’t want to waste my God-given talent, so I will keep striving and never depend on anyone else.

Who’s your role model in portraying gay roles? Nobody in particular. I just observe gay people closely, and that’s where I build the character I need to portray.

What won’t you forget about working with John Lloyd and Sarah? All their well-meant advice about how to survive in show biz. I felt like a sponge absorbing their words of wisdom.

What are some of the love lessons that “Finally Found Someone” imparts? Life is too short, so we must not let an opportunity pass by to tell the people we care about that we love them. And we should not lie to ourselves because it will make our heart suffer the consequences.
Cignal TV recently launched Cignal Entertainment (CE)—a full entertainment brand of original content catering to Filipinos’ evolving tastes—at the Edsa Shangri-La Hotel.

On its roster are shows of different genres such as “Tukhang,” “Tabi Po,” “AdvocaSine 1 and 2” and “Born Beautiful,” a spinoff of the movie “Die Beautiful.”

It is collaborating with content creators, directors, producers and writers via CineFilipino. What a great “go signal” for Pinoys’ creativity to flourish the Cignal Entertainment way!