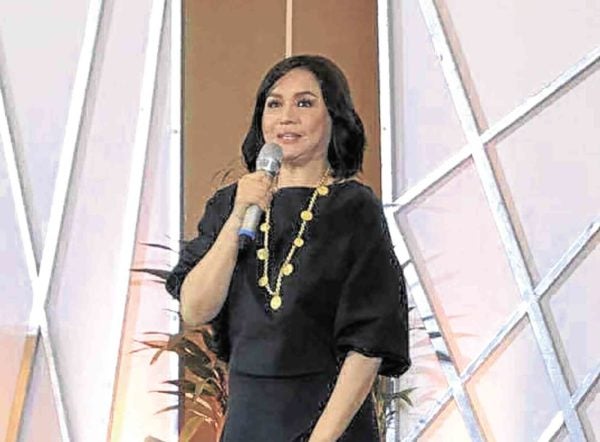 I’m more confident singing in the bathroom these days,” said actress Charo Santos, who admitted that headlining a concert is one of the items on her bucket list.

“I love to sing. My mom was a singer. But I don’t dream of doing it in a venue as big as the Araneta Coliseum or the PICC (Philippine International Convention Center),” the actress said during the media gathering organized by Sun Life Financial, which Charo endorses.

“I took piano lessons when I was in grade school, and I want to pick up where I left off,” said Charo, who retired as ABS-CBN president and chief executive officer in 2016. “Recently, I signed up for swimming lessons because I’ve always been afraid of the water. Now, I know how to float and do the backstroke. It’s about conquering my fears.”

“I’ve discontinued the lessons because the water has become too cold,” she quipped, then adding that she has shifted to painting—although she’s still too shy to mount an exhibit.

“I thought my sons were ignoring my three finished paintings at home. But one day, they told me how much they loved and wanted to keep those for themselves. That’s the best compliment a mother can ever get,” she said.

The Inquirer earlier reported that Charo would be working on another movie by Lav Diaz, titled “Ang Saka ni Henrico.” The director had asked her to learn to speak German for the film. She explained that while 80 percent of the movie would be shot in Singapore, its story starts in Frankfurt. “I work for a German couple, as a nanny to their child,” she added.

She is set to meet some overseas Filipino workers, who are also mothers, as part of her immersion and research. She added that actress Shaina Magdayao would also be included in the cast.

Asked whether she was excited to begin her latest collaboration with Lav, Charo replied: “Yes, rakenrol!,” an expression that Lav is known to use often.