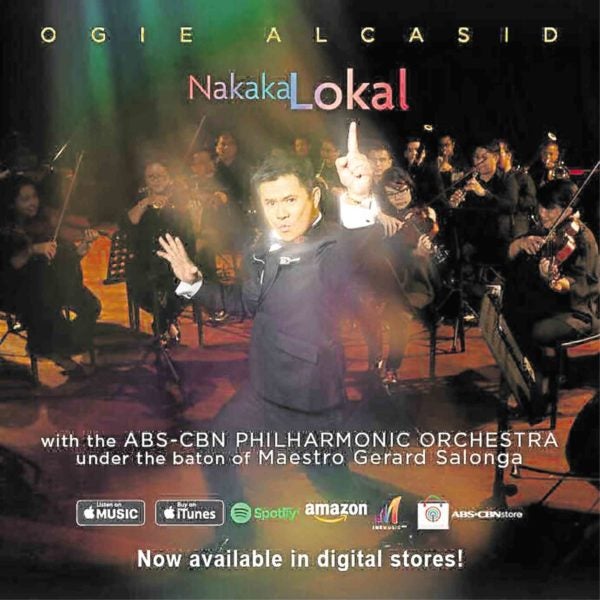 His latest album is a dream come true for Ogie

If you’re partial to Original Pilipino Music (OPM), quick—get in the queue for Ogie Alcasid’s latest album, “NakakaLokal.” Physical copies of the singer-songwriter’s collaboration with the ABS-CBN Philharmonic Orchestra will be released tomorrow, and there are good reasons—10 of them—why the album is one of 2017’s musical must-haves.

But what sets his tunes apart from cookie-cutter crowd-pleasers is the fact that, when Ogie sings them, he lets his heart do the talking—and makes you think of your own romantic upheavals.

The album is a dream come true for Ogie. “I have always wanted to do an album with an orchestra,” he told us last Wednesday.

If “Ikaw ang Buhay Ko,” Ogie’s similarly noteworthy 2016 collection, has “Habang Buhay (Saranghaeyo)” and the gorgeous title track, his latest album features songs that are just as evocative—about unrequited or underappreciated love: In “Akala Ko,” he laments the absence of reciprocation, while the heartbreaking “‘Di Na Muli,” Ogie’s personal favorite in the album (along with “Kailangan Kita”), examines a lover’s inexplicable sudden departure.

For something more “aspirational,” the gospel-tinged appeal of “‘Di Ka Pababayaan” delivers an inspiring message about the existence of hope and life’s silver linings.

Intuitive singer that he is, Ogie makes his lovely melodies even more accessible by his judicious use of vibrato, which is sometimes “pronounced” or excessive in many “maturing” singers’ delivery—as he and his wife Regine Velasquez cogently demonstrate with inspired synergy in the cut, “Ogie and Regine Medley.”

The aforementioned number is an appealing mashup that manages to avoid making “Kailangan Ko’y Ikaw,” “Pangako” and “Hanggang Ngayon” sound like overwrought retreads or tired covers.

There’s also something appealing about how Ogie puts a fresh spin on his other revivals: “Ikaw Lamang” wins over music lovers for its soul-stirring earnestness, while “Kailangan Kita” introduces vocal bends and curls that don’t distract from its melodic flow.

But, the album, conceptualized as Ogie’s loving homage to the beleaguered OPM industry, isn’t just about sad and schmaltzy love songs. It is bookended by celebratory dance tracks (like the groovesome “NakakaLokal”) that astutely capture the vivacious energy of his early hits, “Peksman” and “Ako’y Iyong Iyo.”

“Do You Wanna Dance with Me?,” arguably the collection’s best track (along with “Akala Ko” and “‘Di Ka Pababayaan”), crackles with feel-good nostalgia as it spreads good cheer.

It is one more proof of the performer’s perpetually evolving musicality—and we wouldn’t be surprised if the single becomes Ogie’s next hit as it reintroduces Pinoy swing, a musical genre that has been unfairly waylaid in recent years by the popularity of pop ballads, hip-hop, rock and rap music.

The song’s finger-snapping groove and patter recall the irrepressible charm of Sharon Cuneta’s “I-Swing Mo Ako” and VST and Company’s dance-floor scorchers (“Rock Baby Rock,” “Awitin Mo, Isasayaw Ko,” “Disco Fever”), as well as Hott City’s “If All We’re Gonna Do is Dance,” Teri DeSario’s “Ain’t Nothing Gonna Keep Me from You” and Voyage’s “Souvenirs.”

“Do You Wanna Dance with Me?” is guaranteed to make you sing-along—and swing!

Indeed, they don’t make ’em like they used to—which explains why we’re only too happy to welcome the release of “NakakaLokal.”