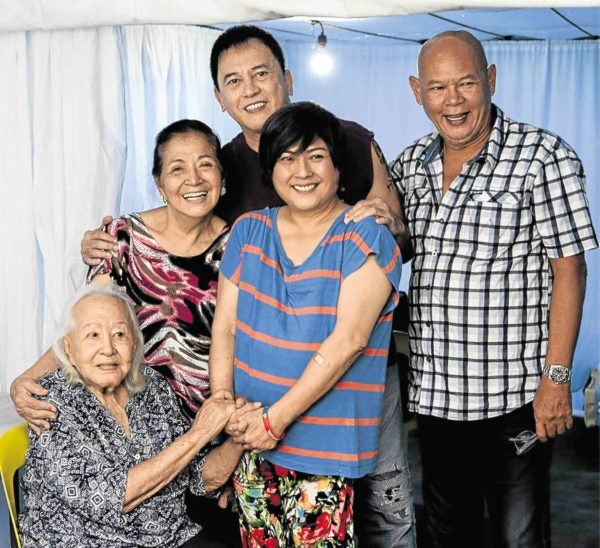 Actress-turned-director Gina Alajar has witnessed the growth of the indie filmmaking scene through the years.

She returns to Cinemalaya this year, with Sonny Calvento’s “Nabubulok.” (She first joined the annual festival on its second year in 2006, for Benji Garcia’s “Batad sa Paang Palay.” Her last Cinemalaya film was Joel Lamangan’s “Sigwa” in 2010.)

“The level of comfort on the set has improved a lot,” she said of the changes in local indies. “Now, we have air-conditioned tents. There are Portalets—separate toilets for men and women.”

During the bad old days, she volunteered, actors almost had to do indie films gratis et amore, “for the sake of art!”

For her Cinemalaya comeback, she accepted the offer from debuting director Calvento out of sheer curiosity. “I was intrigued when I found out that he’s the son of Tony Calvento.”

The young filmmaker’s father, a crime reporter, was behind the old TV show, “Calvento Files.” She related that she had done a few episodes of the series.

Now, it’s time for the actress to return the favor, and she was not disappointed.

“Sonny has a competent team behind him—mostly his coworkers in ABS-CBN, where he writes for TV shows,” she pointed out. “It was a good experience. The whole team was caring and respectful. These kids knew how to deal with actors.”

She made sure not to make the newbie filmmaker feel intimidated—even though she is a director herself. “I didn’t meddle on the set. I was quiet all the time. Good girl ako!”

Although she is now more known as the director of such GMA 7 series as “Pinulot Ka Lang sa Lupa,” she is more partial to acting in front of the camera these days.

Before returning to acting on the small screen, she finished two indie movies with Adolfo Alix Jr., who helped her win a Golden Screen best actress award for “Mater Dolorosa” in 2012.

In Alix’s “Madilim ang Gabi,” Alajar is reunited with Bembol Roco and Phillip Salvador, her costars in Lino Brocka’s “Orapronobis.”

“The last time we acted together was in 1989, in ‘Orapronobis,’” she looked back. The three are known as the original Brocka babies.

It was a heartwarming reunion, she owned up. “The emotions are very personal for me. We’ve known each other for a long time. When we see each other, we don’t talk about work.”

Instead, she makes it a point to catch up on the latest goings-on in their lives. “We’ve been through so much. When I see them, I ask them: How are you? Are you happy?”

For her, personal connections are more valuable. “This is just work. We’re all getting older. I’m really interested to know what we’ve learned after all these years.”

She recalled that when she and Salvador worked on Brocka’s “Bayan Ko: Kapit sa Patalim” in 1984, her son Geoff Eigenmann (who’s now an actor, too) was still in her tummy. “Later, I brought Geoff to the set, and Lino would call him Santo Niño because he was so cute and had curly hair,” she reminisced.

She has another movie with Salvador, Alix’s “Pastor.”

Speaking of unexpected reunions, she bumped into another Brocka baby, Sharon Cuneta, at the Cinemalaya launch held at the Cultural Center of the Philippines (CCP) on Thursday.

Alajar felt a tad embarrassed when Cuneta praised her as a shoo-in in the best actress race.

“Ano ba naman s’ya,” she said. “I really don’t think of awards. It seems all the entries are good this year… Imagine, the Megastar has a Cinemalaya entry. It just goes to show that Cinemalaya is becoming bigger and broadening its horizons!”

Cinemalaya runs at the CCP and Ayala Cinemas from Aug. 4 to 13.