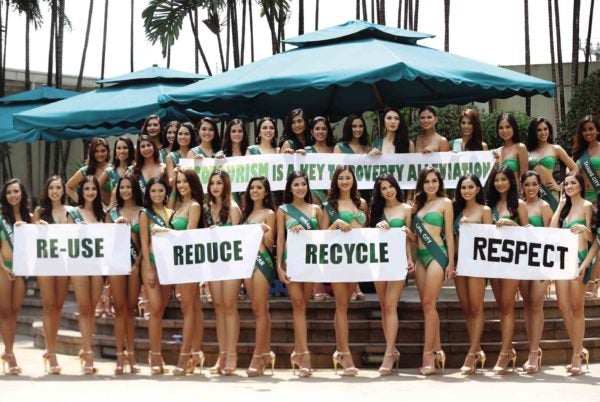 There will be no more “controversial” veils for the 40 Miss Philippines-Earth contestants when they strut in their swimsuits at tonight’s coronation rites at the Mall of Asia Arena in Pasay City.

The candidates’ use of black see-through veils during the preliminary swimsuit judging as seen on Facebook Live did not sit well with some quarters.

For the figure and form competiton, the candidates paraded in identical, black, two-piece swimsuits, with matching black veils.
“I asked the swimsuit sponsor to provide the veils for the candidates’ faces, so that the judges would be more focused on the candidates’ figures,” explained Lorraine Schuck, executive vice president of Carousel Productions.

As in previous years, the candidates were also prohibited from applying makeup for the preliminary judging for beauty of face and poise. 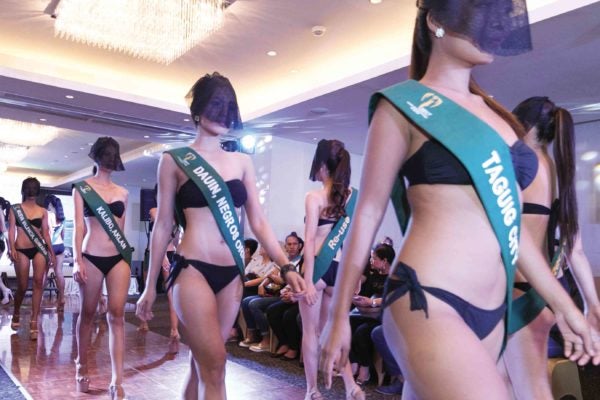 Candidates during the swimsuit parade—PHOTO BY ALEXIS CORPUZ

“But because it was shown live on Facebook, I allowed them to paint their eyebrows, then required them to put some powder and dab on some lip gloss,” Schuck said.

These prejudging segments were previously held behind closed doors. This year, through the pageant’s Facebook page, fans and followers were able to witness real-time how the candidates performed in the different pre-pageant contests, which also had different sets of judges.

For the form and figure competition held at the Oakwood Premier Joy-Nostalg at Ortigas Center in Pasig City, fitness experts and owners of exercise studios comprised the panel of judges. The segment accounted for 20 percent of the preliminary scores.

The face and poise competition held at the F1 Hotel in Taguig City, meanwhile, had makeup artists, photographers and beauty experts as judges. Face and poise account for 35 and 10 percent, respectively.

Environmentalists and other experts measured the candidates’ intelligence during the crucial question-and-answer competition at the Diamond Hotel in Manila. The segment accounts for 30 percent of the contestants’ preliminary scores.

The remaining 5 percent of the candidates’ scores will be for their “behavior and attitude,” and will come from their chaperones and select members of the organizing team.

The three crucial preliminary competitions were made available to the public “for transparency. So the people may become more engaged, and for them to witness how the candidates were judged, and how they performed even before the finals,” Schuck explained.

Carousel vice president and project director Peachy Veneracion, meanwhile, said the process of selecting the candidates remained the same, even after the preliminary competitions were made available to the public.

Five crowns are at stake tonight, namely: Miss PH-Earth, Air, Water, Fire and Ecotourism. The next Miss PH-Earth winner will represent the country in the global Miss Earth pageant, which will take place in the Philippines in November.

The 2017 Miss Philippines-Earth coronation night will be aired tomorrow on ABS-CBN before “ASAP.” The Philippine Daily Inquirer is a media partner of the pageant.