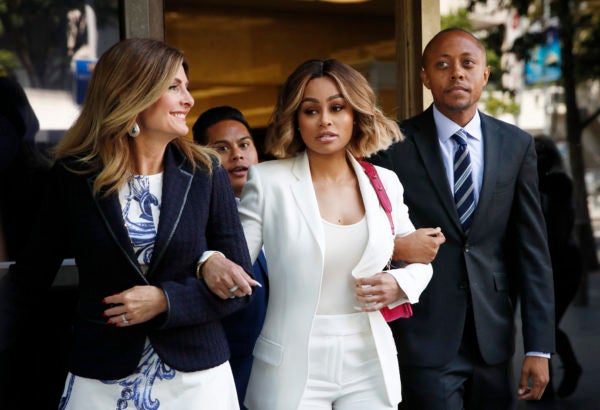 Blac Chyna, center, is flanked by her attorneys, Lisa Bloom, left, and Walter Mosley, as she leaves a courthouse after a hearing on Monday, July 10, 2017, in Los Angeles. A court commissioner has granted Chyna a temporary restraining order against her former fiancee, reality television star Rob Kardashian. (AP Photo/Jae C. Hong)

LOS ANGELES — A court commissioner on Monday issued a temporary restraining order against Rob Kardashian in response to the reality television star’s posting of explicit images of his ex-fiancee on social media last week.

Los Angeles Superior Court Commissioner James E. Blancarte granted the order based on filings by Kardashian’s ex Blac Chyna, who also claimed he hit her in the thigh earlier this year, knocking her down and leaving her bruised.

“Rob has been violent with me in the past and I am afraid to be around him,” Chyna, whose real name is Angela White, wrote in court documents filed Monday in Los Angeles.

The order bars Kardashian from contacting Chyna or coming within 100 yards or her home, car or workplace. The order also prohibits him from posting images online of Chyna or the infant daughter they share.

Chyna’s attorney Lisa Bloom called the hearing as “a complete and total victory.”

“The judge gave us everything we asked for,” she said.

The order will remain in effect until an Aug. 8 hearing.

Chyna sought a temporary restraining order on Monday, less than a week after Kardashian went on a tirade against her on Instagram and Twitter, including posting explicit images of her.

Blancarte said his primary concern was the former couple’s infant child. Bloom said in court that nannies would handle custody transfers while the order is in place.

Kardashian did not appear at Monday’s hearing. His lawyer Robert Shapiro apologized on his client’s behalf outside the courthouse.

“We apologize and have offered our regrets for what has taken place over the past couple of days,” Shapiro said. “And now we move forward to do one thing and one thing only: Whatever’s in the best interest of the child.

He said the former couple remains focused on their daughter, who he said is currently being cared for by Kardashian.

“They’re working this out among themselves as good parents,” Shapiro said.

He said Kardashian agreed to the issuance of a temporary restraining order.

Outside the courthouse, Chyna said, “First and foremost, I want to thank the judge for granting me this restraining order to protect me and I want to (get) back to co-parenting Dream.”

Kardashian and Chyna announced their engagement in April 2016 and starred in an E! reality show about their relationship.

Their daughter, Dream, was born last November. The couple split up a month later.

Kardashian is the younger brother of Kim Kardashian and appeared on several seasons of the family’s reality series, “Keeping Up with the Kardashians.”