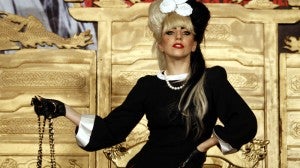 WASHINGTON—Eccentric pop diva Lady Gaga was due at the White House on Tuesday to discuss her anti-bullying initiative, officials said.

Her visit follows a White House bullying conference earlier this year, called to mitigate the plight of nearly a third of US schoolchildren, or 13 million students, who are bullied each year, according to official figures.

Obama was not due to be at home when the flamboyant songstress visited White House officials, as he was flying to Kansas to give a speech on the economy.

But he did encounter an extravagantly dressed Lady Gaga during a fundraising event in California in September, and ABC News said she brought up bullying with the president during a question and answer session that was closed to the press.

Lady Gaga told fans in September that she would bring up the case of a 14-year-old New York boy Jamie Rodemeyer, who committed suicide after complaining in an online video that he had been bullied.

Read Next
Rhian Ramos: Stop bugging me
EDITORS' PICK
What to watch out for when selecting a video surveillance solution
House energy committee chair Arroyo bats for cheap electricity
DOH says COVID-19 cases plateauing, but public shouldn’t be ‘complacent’
23,000 cops to be deployed nationwide for school reopening
Look Through: The fate of impounded stray dogs
Unleash the photographer in you this World Photography Day with vivo smartphones
MOST READ
Sharon Cuneta asks for prayers for friend in ICU who suffered silent stroke
Light therapy could be the answer to your sleep problems
Korina Sanchez reunites with former ABS-CBN co-anchors Julius Babao, Cheryl Cosim
PBA: San Miguel ousts Meralco to arrange finals duel vs TNT
Don't miss out on the latest news and information.