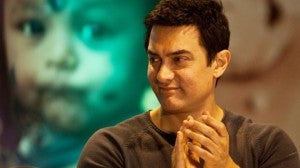 MUMBAI—Bollywood actor-producer-director Aamir Khan has become a father for the third time, using a surrogate mother, his publicist said on Monday.

The baby boy was born at a private clinic on December 1, the spokesman said. The child was “very healthy” and now at home with Khan and his film-maker wife Kiran Rao in Mumbai, he added.

“It was a baby through surrogacy. It’s the first baby he’s had with Kiran… Kiran had a couple of miscarriages in the past so they had medical reasons to try out surrogacy,” he told AFP.

The Mid-day newspaper’s website said that Khan and Rao had released a letter confirming the birth, saying that the baby was “especially dear to us because he was born to us after a long wait and some difficulty.

“Due to medical complications, we were advised to have a baby through IVF (in-vitro fertilisation) surrogacy and we feel very grateful to the Almighty that everything has gone well.”

In recent years he has pushed the boundaries beyond Bollywood’s traditional song-and-dance formula with films like the satirical “Peepli Live” (2010), with an emphasis on high-quality script-writing.