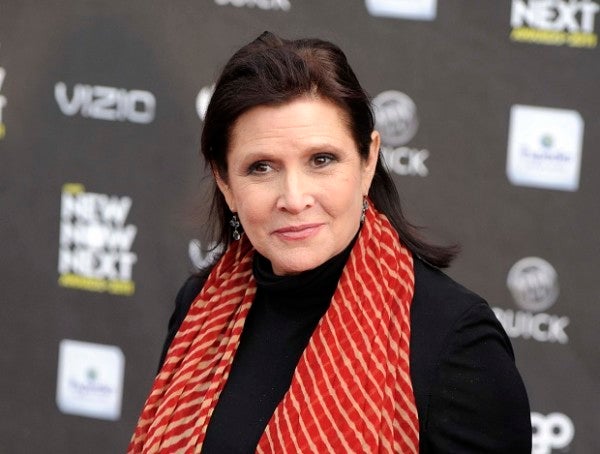 LOS ANGELES, United States — Carrie Fisher had a cocktail of drugs including cocaine and ecstasy in her system when she suffered a fatal mid-air heart attack, a coroner’s report revealed Monday.

The “Star Wars” actress — who catapulted to stardom as the space epic’s rebel warrior Princess Leia — was rushed to hospital in Los Angeles on December 23 after collapsing on a flight from London and was pronounced dead four days later.

There were quantities of alcohol and opiates in her system, according to the toxicology report, which suggested “exposure to heroin, but that the dose and time of exposure cannot be pinpointed.”

Tests revealed the cocaine would have been taken within the previous three days, according to the report, which gave the cause of death as sleep apnea — a breathing disorder — and “other undetermined factors” including heart disease and “multiple drug intake.”

They also showed “remote exposure” to the recreational drug MDMA, better known in its pill form as ecstasy.

A press release from the coroner’s office on Friday indicated that drugs were found in 60-year-old Fisher’s system, but it did not go into detail.

“Ms. Fisher suffered what appeared to be a cardiac arrest on the airplane, accompanied by vomiting and with a history of sleep apnea,” the final report stated.

“Based on the available toxicological information, we cannot establish the significance of the multiple substances that were detected in Ms. Fisher’s blood and tissue, with regard to the cause of death.”

Fisher’s daughter, Billie Lourd, said in a statement released to celebrity magazine People on Friday her mother had “battled drug addiction and mental illness her entire life” and “ultimately died of it.”

Born in Los Angeles in October 1956, the daughter of actress Debbie Reynolds and singer Eddie Fisher became an international star with the release of “Star Wars” in 1977, followed by two sequels.

The space saga is now part of pop culture legend and a worldwide fan favorite. Fisher was back in the spotlight after reprising her iconic role in 2015’s “Star Wars: The Force Awakens” and will appear for a final time as Leia in “The Last Jedi,” due for release in December.

The early 1980s were marked by problems with alcohol, drugs and depression for Fisher, who became known for her searingly honest semi-autobiographical writing.

She turned her best-selling debut “Postcards from the Edge” into a film of the same name in 1990 starring Meryl Streep and Shirley MacLaine.

Over the years she gave various interviews about her diagnosis of bipolar disorder and addiction to prescription drugs and cocaine, which she admitted using on the set of “The Empire Strikes Back” (1980).

Asked by Vanity Fair in 2006 how she persuaded “Star Wars” director George Lucas to give her the part of Princess Leia, she said: “I slept with some nerd. I hope it was George.”

She also discussed being treated with electroconvulsive therapy, in which small electric currents are passed through the brain, to trigger brief seizures and treat depression.

Fisher was returning from the London leg of a tour promoting her headline-grabbing memoir “The Princess Diarist” when she collapsed 15 minutes before landing in Los Angeles, where paramedics and hospital staff were unable to revive her.

Reynolds, who was 84, suffered a fatal stroke the day after her daughter’s death. CBB