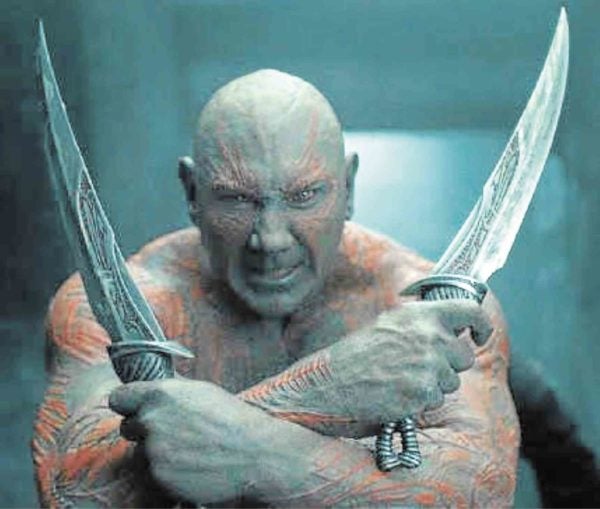 Wrestler-turned-actor Dave Bautista (aka Batista) expressed his support for the LGBT community once again, after a fan on Twitter thanked him for being a straight ally.

The “Guardians of the Galaxy” actor enthusiastically responded: “Obviously, no [thanks] necessary, but I appreciate the acknowledgment. Proud son of a lesbian—and anyone who has [an] issue with that can s**k my b***s!”

His mom, Donna Raye, raised him by herself when he was a kid. He eventually lived with his Filipino father when he was in his teens.

It wasn’t the first time that the former WWE wrestler defended gay people. He spoke against Filipino boxer-turned-senator Manny Pacquiao in February 2016, when the latter made controversial statements that offended LGBT people in the Philippines and in other countries.

Bautista told TMZ then: “My mom’s a lesbian, So I don’t f**king take that sh*t!”

From ‘Wimpy’ to vocally inventive

Zachary Gordon played the titular character, Greg Heffley, in three “Diary of a Wimpy Kid” movies from 2010 to 2012. Now 19, he’s one of the voice talents of the documentary “The Gettysburg Address,” alongside Matthew Broderick, Victor Garber and Cary Elwes.

Last year, Gordon appeared in the TV series, “Dead of Summer,” and lent his voice to a character in “Star Wars Rebels.” His previous voice actor credits include “Family Guy,” “Batman: The Brave and the Bold” and “Madagascar 2.”—OLIVER PULUMBARIT