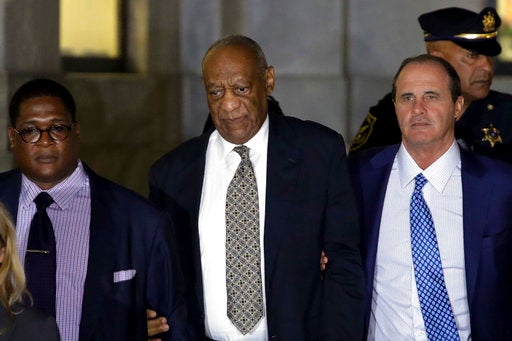 NORRISTOWN, United States—A deadlocked Pennsylvania jury battling to reach a verdict in Bill Cosby’s sexual assault trial was to deliberate a fifth day Friday as to whether or not he drugged and molested a woman more than 13 years ago.

The 79-year-old pioneering black actor could face the rest of his life in prison if convicted on three counts of aggravated indecent assault against 44-year-old Andrea Constand at his Philadelphia mansion in January 2004.

The 12-member jury informed the court that after nearly 30 hours of deliberations, they had been unable to reach a unanimous decision. Judge Steve O’Neill ordered them back into their chamber to continue.

“Each of you has a duty to consult with one another and to deliberate with a view to reaching an agreement if it can be done without violence to your individual judgment,” he read from Pennsylvania law.

O’Neill gave jurors no deadline. Shortly after 9 p.m., after 39 hours of deliberations over four days, he dismissed them for the evening and ordered them to return in the morning.

Although the trial concerns only Constand’s allegations, 60 women have publicly accused the legendary entertainer of being a serial sexual predator in remarkably similar accusations that span four decades.

Earlier Thursday, a handful of Cosby supporters called for the man once adored by millions as “America’s Dad” to walk free, holding up posters with slogans such as “Free Mr. Cosby Now” outside the court.

As tensions rose, one of Cosby’s accusers Lili Bernard, burst into tears after getting into an argument with one member of the group.

The trial marks a crushing fall from grace for an entertainer known for his seminal role as a lovable father and obstetrician on hit TV series “The Cosby Show.”

The avalanche of allegations against Cosby, which have mushroomed since late 2014, have already ended the career and pulverized the reputation of a comedy legend who will mark his 80th birthday next month.

But if the seven-man, five-woman panel ultimately fails to reach a verdict,  O’Neill will be forced to declare a hung jury, leaving the prosecution with the option of requesting a re-trial.

The jury has now surpassed the 30 hours it took a California jury to acquit Michael Jackson of child sex abuse in 2005.

Cosby, on the other hand, has appeared almost serene, exhibiting no outward sign of fatigue, frustration or impatience.

During his comings and goings from the courthouse, the former TV star flashed a smile and exchanged pleasantries with representatives.

On Thursday, his spokesman Andrew Wyatt welcomed the jury’s impasse.

“Today we have really seen Mr. Cosby get the justice he was looking for,” Wyatt told reporters outside the court house.

In closing statements, the prosecution portrayed the actor as a sexual predator who deliberately drugged Constand, who is Canadian, so she would be unable to resist his advances at his Philadelphia home.

Cosby refused to testify and his lawyers called just one witness, a police detective, before resting their case in minutes on Monday.

If convicted Cosby faces a maximum penalty of 10 years in jail and a $25,000 fine on each charge. But there is no mandatory minimum, meaning that the judge overseeing the case could also allow him to walk free.

Nothing has filtered out about the state of the deliberations, with only hints to be gleaned from questions they have asked O’Neill.

They appear to have been drilling down into the testimony, asking the judge to re-read statements from Constand and the police, as well as Cosby’s original deposition in 2005, in order to compare the he-said, she-said allegations.

If Cosby is convicted, even on one count, prosecutors will probably petition for his $1 million bail to be overturned so that he be taken into custody immediately.

Valentino said she was prepared for anything, even an acquittal. If nothing else, she said the case has revived debate about rape and the nature of consent.

“It makes you think that if nothing is resolved here in a positive way, at least there’s been some transformation in society, thanks to the conversation.”