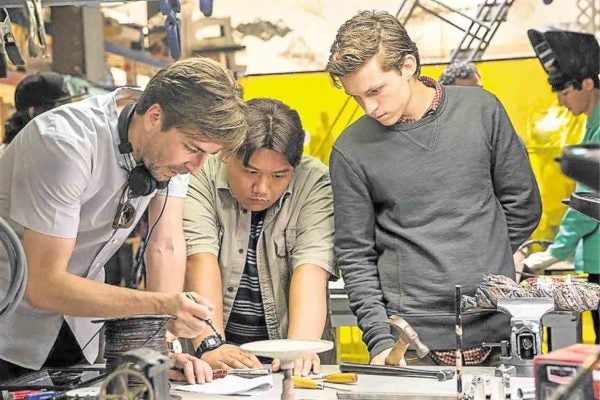 Jacob, born to Filipino parents and raised in Hawaii, portrays Ned Leeds in the Spider-Man reboot directed by Jon Watts.

Jacob landing a role in a big movie like ‘Spider-Man: Homecoming” is especially noteworthy because he did not have any acting gigs in Hawaii. At Damien Memorial School in Honolulu, he enjoyed singing and strumming ukulele with his pals.

Taking a two-year course at the New York Conservatory for Dramatic Arts sparked Jacob’s interest in film and acting.

Jacob recalled screaming and yelling when his agent called and told him he got the part in “Spider-Man…” In his original 1964 incarnation as created by Stan Lee and Steve Ditko in Marvel’s comic books, Ned Leeds was a Caucasian fellow reporter of Peter Parker at the Daily Bugle. Ned and Peter vied for the attention of Betty Brant, the paper’s secretary.

In the animated TV series, “The Spectacular Spider-Man,” the character was portrayed for the first time as Asian and renamed Ned Lee.

Jacob, who will reportedly return in an untitled “Spider-Man…” sequel due in 2019, will be Sancho Panza to Tim Blake Nelson’s Don Quixote in Chris Poche’s “The True Don Quixote. ”

Excerpts from our e-mail interview:

How and when did you learn you got the part? I actually remember the exact date I got the call that I got the “Spider-Man: Homecoming” role—May 6, 2016. It was probably the best day of my life. The first person I told was my brother-in-law, because I wanted to keep it a surprise to my family. He knows how to keep a secret.

When I finally told the rest of my family, they were all in shock. I took them out to dinner after my graduation from film school, and they were all crying in an Applebee’s restaurant. It was really great!

Are you a big Spider-Man fan? How cool is it that you get to be the young Peter Parker’s best friend?

Yeah, I am. I was really into the first “Spider-Man” films with Tobey Maguire, so it’s pretty cool how it all came full circle. It’s cool to play his best friend. I get to watch him do his superhero thing while I am also there to see him blunder in school. It’s a fun dynamic.

Did part of your audition involve reading lines with Tom Holland to see your “buddy chemistry” with him?

Yes, it did. My audition was a two-step process. First, I did a self-taped audition. After about two weeks, they flew me out to Burbank (California) to do a screen test with Tom. Instantly, the chemistry between us was apparent.

And, yes, we did things together to bond. Our director Jon Watts tasked Tom and me to build a Lego Star Wars Death Star as a bonding exercise. The two of us did a quarter of it, then everyone else tried to help us finish. Before we were even able to finish it, the prop department wanted it back. We basically did the prop department’s job for them.

Can you elaborate on your quote, “He (Ned) understands Peter’s life, and he thinks he’s the one who can help him deal with being a crimefighter and deal with girls”? Ned is the only person outside of Tony Stark who knows his secret identity. Peter and Ned are teens who are going through the same things we all did—finishing homework, having a crush, trying to have a social life. Ned helps Peter in both parts of his life—being a superhero and being a normal high schooler.

What type of friend are you in real life? I like to think I’m a pretty good friend. I love having a good time, and I enjoy being able to share those good times with others.

What aspects of your growing-up years inspired you to become an actor? Growing up, I wanted to be a musician. My mother, in typical Filipino-mom fashion, would always make me go up in front of people at parties to sing. Back then, as a kid, I was mortified. In retrospect, I see that doing that as a child helped me get over my fear of being in front of people.

My cousins are also talented in the arts. They could dance and play instruments, so when I was growing up, I was around performance and art.

In terms of becoming an actor, I fell in love with the art while I was in film school. Learning about the intricacies of filmmaking and the technique of acting piqued my interest.

Being an actor meant becoming more worldly and pursuing your career all over the world, which was why I had to move away. If I was going to be successful, I knew I had to leave the islands (Hawaii).

Did you grow up in a typical Filipino-American family that likes to sing and perform? Did you watch Filipino movies and TV shows? Yes, I grew up in a typical Filipino home. Everyone spoke Filipino, and even though I didn’t speak it, I understood every word. They love parties, karaoke and just having a good time. Yes, I did watch a lot of TFC (The Filipino Channel) when I was growing up.

What’s next for you? I’m doing a couple of things, including a great independent film.

What are your long-term goals? My long-term goals are to be happy with my career and eventually set up foundations to raise money for children’s hospitals and cancer research.