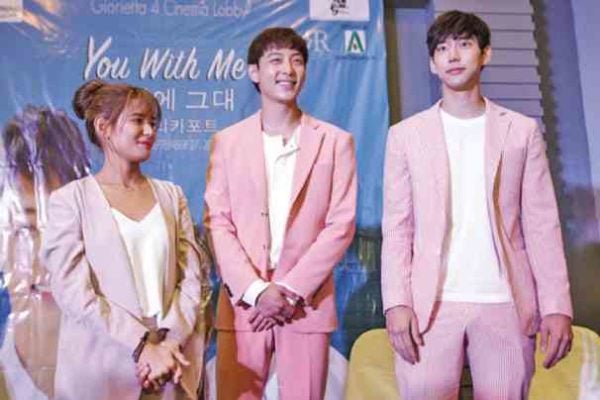 Starting June, the trio will be working on a movie, titled “You With Me,” 70 percent of which will be shot in South Korea.

On May 19, Hyun-woo and Ju-hyong flew to Manila for the film’s look-test and pictorial, and had dinner with their leading lady.

“Devon is beautiful. I’m pleased with my first impression of her. I look forward to working with her,” Hyun-woo said in Korean during the meet-and-greet session with Filipino fans at the Glorietta 4 cinema.

Devon said she had to undergo a fashion makeover and attend a series of acting workshops for the project. She considers “You With Me” her biggest break so far. She joined show biz by way of the reality show, “PBB: Teen Clash 2010,” where she was voted fourth placer. She is currently a member of the dance group, Girltrends.

In “You With Me,” Devon plays Kim, a wealthy Filipino girl who fled to Korea to run away from her overprotective parents.

There, she serves as an English tutor to Hyun-woo’s character Jason, who later falls for her. Ju-hyong plays Jason’s assistant Rintaro, the cause of the latter’s jealousy.

Also present at the meet-and-greet session was actress Hazel Faith dela Cruz, who plays Devon’s best friend in the movie. Hyu-woo and Ju-hyong greeted screaming girls in Filipino, saying “Mahal ko kayo,” and gamely answered their questions, as well as posed for selfies. They also sang the “Happy Birthday” song for Devon.

Hyun-woo was last seen in the drama, “The Gentlemen of Wolgyesu Tailor Shop,” while Ju-hyong was part of the hit K-drama, “Hwarang.”

“You With Me” is produced by Gitana Productions, in cooperation with the South Korean government. Executive producer Shine Ricafort said the Korean Film Commission green-lit the project in February. Auditions were held there in April.

The filming in Korea, with Rommel Ricafort at the helm, will be in June, and in Manila, in July. The movie will begin its theatrical run nationwide on Sept. 27.